Mikhail Saakashvili became very furious when he found that the inscriptions in the drivers’s cabin of a new metro train were all made in Russian. 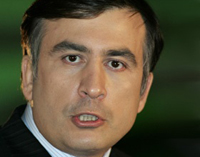 The train driver was scared out of his wits and told the Georgian president that they would correct this awful mistake as soon as possible.

Georgia’s Rustavi-2 TV company did not broadcast the report. Georgian TV companies are very careful with the information they report about Saakashvili. The Georgian president contradicts himself so often that his PR managers feel completely exhausted about his statements.

He once stated in an interview with an American journalist that all Georgians would speak English in two years, even in most remote villages. Then he publicly said that he taught his elder son to speak Russian.

At the moment Georgia tries to get rid of everything related to or connected with Russia. And this process is widely spread almost in all spheres of public life.

After the war in August 2008 most Russian television channels in Georgia were blocked. Georgians rushed to buy satellite aerials. Some Georgians turned to the Internet to watch Russian news.

All the cinemas in Tbilisi show only films in the Georgian language. Sometimes the translation quality is very low. Russian films are no longer shown on the Georgian television.