Margaret Thatcher to be remembered as trendsetter for women in politics

If a woman is placed on the same level with a man, she will become superior to him, Margaret Thatcher used to say. The Iron Lady became widely recognized as the trendsetter for women in politics. Her aphorisms left a conspicuous mark in the history of world politics. 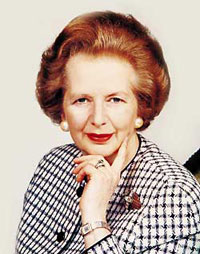 Margaret Thatcher to be remembered as trendsetter for women in politics

Thatcher gained her nickname – Iron Lady – owing to the Soviet Union. The Krasnaya Zvezda newspaper (The Red Star) published an article January 24, 1976 following Thatcher’s speech at the British Parliament. The article was titled as “The Iron Lady Intimidates” but the headline was translated into English as simply “The Iron Lady.” Thatcher liked the tag and it became her slogan at the elections in 1979 – “What Britain needs is an iron lady.”

Margaret Thatcher was born on October 13, 1925 to Alfred and Beatrice Roberts. She married Denis in 1951. She gave birth to twins, Mark and Carol a year later. When a student, she became an activist of the Conservative Party and subsequently became known as the youngest female candidate to the parliament.

Thatcher began to look for a safe Conservative seat in the mid-1950s and was narrowly rejected as candidate in 1955, and was not selected as a candidate in the 1955 election. She had several further rejections before being selected for in April 1958. She won the seat after hard campaigning during the 1959 election and was elected as a member of Parliament. Her maiden speech was in support of her Private Member's Bill (Public Bodies (Admission to Meetings) Act 1960) requiring local councils to hold meetings in public, which was successful. In 1961 she went against the Conservative Party's official position by voting for the restoration of birching.

She chaired the Ministry for Education in 1970. Thatcher decided to abolish the program of free milk for schoolchildren aged seven to eleven. The initiative sparked a storm of protests from the Labor Party and the media and led to the appearance of “Margaret Thatcher, Milk Snatcher” moniker. The London Sun Times named her England’s most unpopular woman.

The British economy faced severe problems during the 1970s when miners went on strikes across the nation. “You cannot strengthen the weak by weakening the strong. You cannot build character and courage by taking away man's initiative and independence. You cannot bring about prosperity by discouraging thrift. You cannot help men permanently by doing for them what they could, and should, do for themselves,” she quoted US President Abraham Lincoln.

In May 1979, Thatcher became the first woman in the history of Western Europe, who chaired the government. The British economy woke up very quickly. Thatcher showed a great influence on the mindset of the whole British community.

Thatcher demonstrated her obstinacy and fearlessness in foreign politics during the Argentinean incursion into the Falkland Islands in 1982. Argentina sent its commandoes there thinking that a woman, who was governing Britain three thousand miles away from the battlefield, would not become a serious obstacle.

Many of Thatcher’s colleagues believed that it would be insane to unleash the war for something that tiny as the Falkland Islands. Britain was going through a crisis and everyone believed that the government should rescue its own nation first and foremost. Many newspapers wrote that Thatcher was a crazy individual who thought of herself as a remarkable woman. Journalists were wrong. She sent 98 warships with 8,000 military men to the islands.

Her ambition and honesty made the imminent disaster become a victory. When journalists asked Thatcher what she was going to do in case of misfortune, she responded that she did not even think that a misfortune was possible.

She retired in 1990 after she failed the idea of introducing the head tax. She now suffers from Alzheimer’s disease and does not look like an iron lady at all. However, she will always be remembered as the trendsetter of women in politics. She was the first British prime minister who kept her post three terms in a row.