Iraq is like a suitcase without a handle for the US administration. It hard to carry it and it is even more hard to leave it. President Barack Obama kept his pre-election promise when he announced the date to withdraw the US troops from the war-torn nation. However, he is be ready to return there at any moment to defend the American guys. 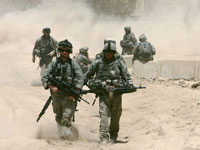 The plan about the end of the occupation of Iraq, which Obama announced, seems to be rather odd. Obama leaves his country-fellows on the deserted territories of the country as hostages instead of clearing the land of the US military presence. It goes without saying that Iraqi insurgents will continue to attack US servicemen, which will give another reason for yet another aggression. The US soldiers will have to stay locked up in their garrisons to avoid countless losses.

To keep his pre-election promise about the end of the highly unpopular war, President Obama stated that the US military mission in Iraq would end by August 31, 2010. However, it does not mean that the United States will entirely refuse from its military presence in the country. About 142,000 US military men are serving in Iraq at the moment. Some 50,000 soldiers will stay there after August 2010 to train the local security forces and conduct restricted counterterrorist operations. The war in Iraq has taken the lives of over 4,000 American men within six years. Yet, Obama claims that all the troops will be completely withdrawn by the end of 2011.

This conclusion is a part of the program to increase the field strength in Afghanistan. US Defense Secretary Robert Gates stressed out that the US military presence in Iraq would remain a highly relevant factor during the entire transition period. Barack Obama said that he had decided to extend the military pullout not to let Iraq become the global terrorist center.

US servicemen will also deal with the protection of civil missions of foreign states. Iraqis would have to be completely capable of maintaining security in their country by 2010.

Obama’s plan to pull out the troops from Iraq has turned out to be a highly precautious initiative. The pullout terms became two months longer than those he promised prior to his election. The procedure is not going to be fast in the beginning. It was previously planned to withdraw one brigade a month. Nowadays, according to the recommendations of the Pentagon, a full-scale redeployment of troops from the region will start in a year only. The military command wants to be certain that the general election in Iraq, which is set to take place in December 2009, will take place under peaceful conditions.

This approach has won the support of Obama’s former rival, Rep. Senator John McCain, who repeatedly reproached Obama for his naive views about the Iraqi problems.

Official spokespeople for the Iraqi administration stated that the nation would be able to maintain peace, which was obviously quite a doubtful statement to make. US troops will probably stay in Iraq during the upcoming ten years.

Iran ’s spiritual leader Ayatollah Ali Khamenei said before that the United States was going to stay in Iraq for a long-term perspective, which would only do an ill service to Iraq.

"The occupiers are preparing the ground for their long-term stay in Iraq which is a great danger and the Iraqi authorities should be aware of this danger," Khamenei told visiting Iraqi President Jalal Talabani.

"The occupying troops should exit Iraq as soon as possible, since any day of delay is a loss for the Iraqi people," he told the Iraqi president. "The presence of US and British forces and advisers harms Iraq."