Russia to give 50 armored vehicles to Palestine

Saudi Arabia has confirmed its intention to assign one billion dollars for the reconstruction of the Gaza Strip. Prince Saud al Faisal stated at the international conference of the donor countries, which currently takes place at Egypt’s Sharm-el-Sheikh, that the funds would be wired through the Saudi Fund for Development. 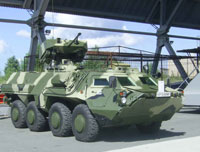 Russia to give 50 armored vehicles to Palestine

US Secretary of State Hilalry Clinton announced the allocation of $900 million to Palestine at the conference. About $300 million of the amount will be meant for the Gaza Strip, whereas the remaining $600 million will be wired to the Palestinian authorities to boost the economic development of the country. The assistance of the donor countries to the Palestinian economy, including the recreation of Gaza, may exceed $3 billion.

The Gulf Cooperation Council, made up of Bahrain, Qatar, Kuwait, Oman, Saudi Arabia and the United Arab Emirates offered $1.6 billion of gratuitous grants for the recreation of Gaza’s infrastructure yesterday, Itar-Tass reports. Russia decided to support Palestine with 50 armored vehicles, two civil helicopters, as well as with food and medications. Russia’s Dmitry Medvedev sent a message to participants of the above-mentioned conference saying that the stability of the Palestinian state structure was a matter of special significance to Russia.

This area has some of the fastest growing economies in the world, mostly due to a boom in oil and natural gas revenues coupled with a building and investment boom backed by decades of saved petroleum revenues. In an effort to build a tax base and economic foundation before the reserves run out, the UAE's investment arms, including Abu Dhabi Investment Authority, retain over $900 billion in assets. Other regional funds also have several hundred billion dollars.

The region is also an emerging hotspot for events, including the 2006 Asian Games in Doha, Qatar. Doha also submitted an application for the 2016 Summer Olympic Games, although this bid was unsuccessful having recently been dropped from the list of candidate cities.