World turns into 'gangsta paradise' as crisis continues to aggravate

USA’s gang capital, Chicago, slowly turns into the center of criminal wars, as it was during the 1920s. Criminal groups in China, Belarus and Russia have been getting more active recently too. 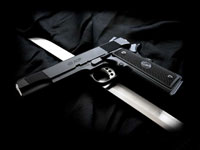 World turns into 'gangsta paradise' as crisis continues to aggravate

Global financial and economic difficulties lead to the growing level of criminality in many countries. US citizens already fear that Chicago may soon retrieve the status of the gangster capital. Over 500 people were killed in the city last year, and all of them died of gunshot wounds, officials of the Chicago Police Department said. At least 450 of them were killed in shoot-outs between criminal groups.

A new generation of drug dealers hires street gangsters and even underage children for their profit. US authorities take tough measures in their struggle against the wild outbreak of gangsterism. The strategy, which US military used in Iraq, now helps the police fight crime in Chicago. The Mobile Strike Force, created late last year, includes two companies of 48 officers each. The squad managed to penetrate into several gangs within only one month of secret operations, which allowed to achieve a considerable reduction in the amount of street crimes.

Sweden has faced a rise of criminality during the recent several months too. The number of bank robberies has doubled in the country during the recent year. Sixty-one incidents of bank robberies were reported in Sweden in 2006, whereas in 2008 the amount of such crimes skyrocketed to 155. Malefactors begin to attack small boutiques, while the number of home robberies started to decline.

Russian gangsters follow a different strategy in their crimes: they prefer to steal money deposits. Camouflaged men may steal ATMs from supermarkets in broad daylight. The most recent incident of a daring robbery took place in Russia last week, when masked perpetrators attacked a CIT vehicle on a federal highway and stole 43 million rubles (more than $1 million).

A wide variety of historical gangs, such as the Muslim Assassins, Adam the Leper's gang, Indian Thugs, Chinese Triads, Japanese Yakuza, American Old West outlaw gangs and Italian Mafia crime families have existed for centuries. These early gangs were known for many criminal activities, but in most countries could not profit from drug trafficking prior to twentieth century drug prohibition laws such as the 1912 International Opium Convention and the 1919 Volstead Act. Gang involvement in drug trafficking increased during the 1970s and 1980s, but some gangs continue to have minimal involvement in the trade.