Hillary Clinton is going on a major tour of East Asian countries as the US Secretary of State. She will try to win the support of China and Japan and will also try to become a peacemaker in the question of the North Korean nuclear program. Why is the new US administration so interested in this region? 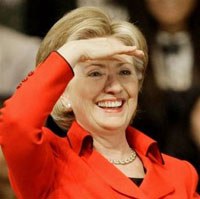 Building cooperation with China has become a priority issue for Barack Obama’s administration. The fact that Hillary Clinton is traveling to East Asia means that the USA does not believe that Russia is a first priority partner to discuss vital issues with. Washington needs levels of influence and potential allies to conduct talks with Russia. That is why Hillary Clinton is going to Asia.

Mrs. Clinton made her first foreign visit to Japan. Afterwards, she went to Indonesia, South Korea and China. Tokyo perceived it as a token of increased attention that Washington was showing to its ally in the east. Japan believes that the new US administration will give more preference to China rather than to Japan.

China is probably the most important partner for the United States. Obama plans to develop relations with the country and go far beyond the economic field. The USA is looking for a niche in the international field that would allow it to achieve success.

Clinton’s predecessors usually chose Europe or the Middle East for their first visits abroad. The Asian route shows that the US administration pays a lot of attention to this region and seeks stronger ties with it. Mrs. Clinton said once during her pre-election campaign that the relations between the United States and China would become the most important bilateral relations in the world during the 21st century. She also stated during her first press conference as the new Secretary of State that the USA would have to conduct a broad dialogue with China.

The nuclear program of the Korean Peninsula is also included on the agenda of Mrs. Clinton’s Asian tour. The tension between the North and the South Koreas has been growing recently. Clinton will hold consultations with South Korean officials to discuss opportunities of how they could bring NKorea back to nuclear negotiations.

It will be a hard nut for the USA to crack. North Korea single-handedly terminated all agreements with Seoul. Pyongyang pulled out from a number of inter-Korean agreements, including the 1991 peaceful cooperation agreement and the agreement on mutual non-aggression.

North Korea has recently taken a number of abrupt moves against its neighbors. The actions of NKorean battleships in the Yellow Sea have become more provocative recently. In addition, Pyongyang threatened to destroy the SKorean government, which refused to provide gratuitous aid to the north.

It is obvious that North Korea has been doing all that to attract the attention of the new US president. NKorea wants Obama to understand that the USA must not put its problems into cold storage, taking into consideration the fact that NKorea was not a part of 20 vital directions of Obama’s activities in foreign politics. The USA has swallowed the North Korean bait, but Washington has all chances to get rid of the fire in the region, which will also help it improve the ties with China.