Top officials of world’s biggest financial structures have become frequent guests in Ukraine lately. They assigned a great amount of money to the country, but it seems that the efforts were wasted. International creditors will most likely turn their back to Ukraine as Viktor Yushchenko and Yulia Tymoshenko continue to fight with each other. 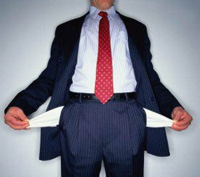 Thomas Mirov, the head of the European Bank for Reconstruction and Development, is finishing his three-day visit to Kiev. The EBRD has given Ukraine a $135-million-dollar loan to cure the effects of the Chernobyl nuclear disaster. The bank has already assigned $4.1 billion to Ukraine.

The government of Yulia Tymoshenko is desperately seeking the funds to live up to the nearest elections at all costs. Tymoshenko still manages to stay afloat in Ukraine, but she finds herself in rather confusing situations on the international level.

For example, let’s take her recent meeting with the ambassadors of the Group of Eight, the IMF, the World Bank and the European Committee. The Ukrainian prime minister urged the officials to give Ukraine loans in the total amount of five billion dollars to replenish the budget deficit. Tymoshenko added that she had sent letters containing adequate requests to a number of countries, particularly to the USA, Russia, Japan, China, the EU and Saudi Arabia.

The news became a surprise to many of the diplomats present. Austrian Vice Chancellor and Finance Minister Josef Proell set out his sympathies to Ukraine ’s aspiration to receive loans not only from the IMF, but from separate countries too. The official stressed out that the IMF played the decisive role in such affairs.

International financial organizations found themselves in a very uncomfortable situation. The World Bank, for example, does not deal with the issues of budget deficit funding – it is a prerogative of the International Monetary Fund.

The credit assistance of the International Monetary Fund is based on very tough conditions. The targeted use of the funds is the most important one of them. Ukraine received the first tranche - $4.5 billion – in November and spent it all in just several weeks. The nation’s economy did not have a vestige of recovery. Roman Zhukovsky, an official spokesman for Yushchenko’s team said that the IMF asked Kiev to cut the budget deficit to one percent of the GDP in 2009. The index in the parliament-approved budget makes up three percent, which was too optimistic, local analysts acknowledge.

A second tranche from the IMF will not solve the deficit of the Ukrainian budget no matter how the situation unfolds further. Tymoshenko stated only several weeks ago she was conducting financial assistance talks with six countries, including Russia. Ukraine’s President Viktor Yushchenko harshly criticized her for that.

“It is very hard morally and psychologically to comment on the making of the secret Molotov-Ribbentrop Pact, when it goes about Russia’s five-billion loan to Ukraine,” he said.

It goes without saying that it would be a lot more pleasant for Ukraine to become financially dependent on Europe or the United States. However, Europe’s developed countries are having a hard time because of the economic crisis. The USA showed a token of understanding only when it became known that Kiev’s request about the urgent financial assistance was pending in Moscow. An official spokesman for the US State Department said that Obama’s administration would consider Ukraine’s request if such an inquiry had been made.

Ukraine is desperately seeking help. Standard & Poor’s agency said describing the condition of the nation’s banking system that the country was suffering an economic shock.