Iranian Defense Minister Mostafa Najar arrived in Moscow Monday with an official visit, Interfax reports with reference to the press secretary of the Russian Defense Minister, Colonel Aleksei Kuznetsov. Najar is expected to negotiate the issue of the delivery of Russian S-300 missile systems to Iran. 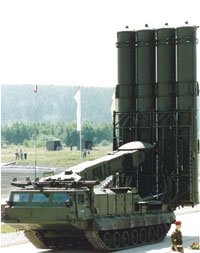 The defense ministers of Russia and Iran will conduct negotiations on February 17 to discuss the current and future questions of military cooperation between the countries.

The visit of the Iranian minister will last till February 18. Mostafa Najar will have a meeting with an official spokesman for Russia’s defense export giant, Rosoboronexport, and visit one of the country’s defense enterprises.

Rosoboronexport’s General Director Anatoly Isaikin stated before that Russia had not shipped S-300 systems to Iran. However, the official added, Russia would be ready to organize the shipments upon the adequate instructions from the country’s administration.

The information about the delivery of Russian S-300 missile systems originally surfaced in Iranian media outlets. Spokespeople for the Russian Federal Service for Military and Technical Cooperation released a statement claiming that the information was not true to fact.

Most likely, the above-mentioned visit of the Iranian defense minister to Moscow will most likely leave the situation with the delivery of S-300 systems unchanged. For the time being, Russia does not have an intention to ship the complexes to the Iran since the deal may seriously obstruct the new dialogue between the Kremlin and the new US administration, The Kommersant newspaper wrote with reference to sources at Russia’s defense complex.

The S-300 contract can be executed at any moment; other contracts can be signed with Iran too, particularly about Buk-M1 missile systems. A political decision is required to give them all a go, although it seems that such a decision is not a matter of the near future.

Most likely, Russia hopes to improve its relations with the United States. Russian Foreign Minister Sergei Lavrov is expected to have his first meeting with the new US Secretary of State Hillary Clinton in March. President Dmitry Medvedev will have an opportunity to shake hands with Barack Obama in April of this year. Moscow pins big hopes on those talks: the two countries may find a compromise on the issues of nuclear disarmament and the deployment of the US national missile defense system in Eastern Europe. The news about the shipment of S-300 systems to Iran will mar the atmosphere of the talks.

Vyacheslav Davidenko, the press secretary of Rosoboronexport, said that Russia would most likely not change any of its views pertaining to the deliveries of S-300 systems to Iran, not even after the visit of the Iranian defense minister.