The United States pledges to revise the plans to deploy the missile defense system in Europe if Russia talks Iran out of its nuclear weapons program. A spokesperson for the US State Department said that the new administration would like to cooperate with Russia in terms of missile defense issues since the system was being built to protect Europe and North America against the rogue states - against Iran, first and foremost. Iran’s recent satellite launch proves that the nation has an opportunity to launch long-range missiles, the US administration believes. 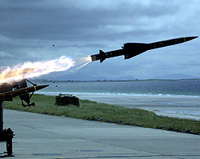 It is an open secret that the United States and several other countries suspect Iran of the development of nuclear weapons under the guise of a peaceful nuclear program. The Iranian leadership rejects the accusations claiming that its nuclear program is solely aimed at the needs of the country’s energy industry.

Barack Obama’s administration is prepared to conduct talks with Moscow regarding a possibility for the USA and Russia to join efforts in the field of missile defense. In this case, the Americans believe, it will be possible to relieve Russia of its concerns regarding the possible threat that the system could carry against Russia. Moscow is currently certain of the opposite.

Russia’s Foreign Minister Sergei Lavrov stated over the weekend that the deployment of the US missile defense system in Eastern Europe was related to strategic stability and strategic parity, Interfax reports.

“As for missile defense, we are certain that it has nothing to do with the Iranian nuclear program. It touches upon the strategic arsenal of the Russian Federation - we have released a number of public statements and explained it on a professional level. The new administration of the United States must analyze its missile defense plans in Europe, the minister believes.

“We hope that Obama’s administration is currently analyzing its ideas and plans of the third missile deployment area in Eastern Europe and we hope that they will take our position into consideration. We have also paid attention to the signals coming from Washington about the readiness to develop anti-missile concepts in association with the Russian Federation, including those presented by then-President Vladimir Putin at his meeting with George Bush in Kennebunkport in July 2007.” Lavrov said.

On the other hand, Washington hopes to improve ties with Iran after the presidential elections, which are slated to take place in the country in June. If Mahmoud Ahmadinejad leaves the office, Iran and the USA will be able to settle all scores alone, without Russia’s help.