US President Barack Obama is ready to discuss the perspectives of the START-2 Treaty with Russia. At the same time, the question regarding the deployment of the missile defense system in Poland and the Czech Republic remains open. 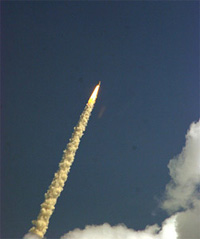 The Czech Republic expects the USA to build a radar station on its territory during the forthcoming five or six years. However, it has recently transpired that the new US administration intends to delay its missile defense system plans in Europe. Vice President Joseph Biden said that the USA was not going to scrap the plans. Obama’s administration would consult both NATO members and Russia, Biden added.

Bush’s administration regularly “consulted” Moscow about the elements of its missile defense system in Europe, although it did not change the decision to deploy ten interceptor missiles in Poland capable of downing missile of potential enemies at very high altitudes. A powerful radar is to appear in the Czech Republic : the station will be able to monitor Russia’s entire European and Central territory. However, the radar will not be able to reach the south-east of Europe, which is close to Iran.

Nevertheless, Russia may hope for something positive just because of the fact that Obama’s administration is open for consultations. “The US administration sent out a clear signal to us saying that it was ready to resume the dialogue on all questions of mutual interest,” Vice Prime Minister Sergei Ivanov said. He added that there were still considerable discrepancies between Russia and the United States as far as the missile defense issue was concerned.

The USA and the USSR signed the Anti-Ballistic Missile Treaty on May 26, 1972. In the Treaty on the Limitation of Anti-Ballistic Missile Systems the United States and the Soviet Union agree that each may have only two ABM deployment areas, so restricted and so located that they cannot provide a nationwide ABM defense or become the basis for developing one. Each country thus leaves unchallenged the penetration capability of the others retaliatory missile forces. Precise quantitative and qualitative limits are imposed on the ABM systems that may be deployed. Both Parties agreed to limit qualitative improvement of their ABM technology.

An additional protocol signed in July 1974 allowed only one ABM deployment area – either around the capital or in the launching area. The USA violated the agreement when it deployed Globus II radar station in Norway and included it in its missile defense system in February 2001. The USA single-handedly pulled out from the treaty on February 12, 2002.

The Strategic Arms Reduction Treaty (START-II) is closely connected with the questions of the missile defense system. This document is meant to play an important role in the non-proliferation of nuclear weapons in the world. Barack Obama mentioned at a recent press conference that he was going to discuss the issue with his Russian counterpart Dmitry Medvedev.

Russia’s reaction followed very quickly. “We are ready for negotiations that will give an opportunity to preserve the non-proliferation regime. We are satisfied that the new administration in Washington pays priority attention to this issue,” Russia’s Foreign Minister Sergei Lavrov said.

The START-1 Treaty was signed in Moscow in 1991. The USSR and the USA undertook to cut their nuclear arsenals to 6,000 nukes each during seven years. The document prohibited the production and the deployment of ballistic and cruise missiles.

Russia and the USA stated December 6, 2001, that they had fulfilled their obligations on the START-1 Treaty. Military experts said that Russia had 1,136 carriers and 5,518 nukes, whereas the USA owned 1,237 strategic carriers and 5,948 nuclear warheads. However, the experts said, the USA violated the treaty: the country did not utilize nuclear warheads and second-stage launchers and created the retrievable potential.

In addition, unlike Russia, the USA has not ratified the Comprehensive Nuclear Test Ban Treaty, which makes it difficult to negotiate non-proliferation issues with the United States.