Two parties take the lead at the election of the Israeli parliament. Foreign Minister Tzipi Livni and Benjamin Netanyahu both claim victory. Who is going to play the decisive role in the future Israeli government? 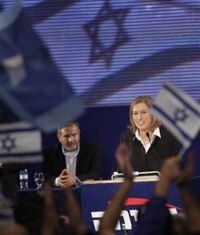 The Israeli parliament, the Knesset, now consists of 12 parties and blocs that overcame the two-percent barrier. They all shared 120 deputy mandates. Kadima, the ruling party, received 22 percent of votes, whereas proponents of tough anti-terrorist measures from Likud follow with 21 percent. It is hard to say that Kadima is a lenient party: it was Kadima’s administration with Livni at the head that launched the Cast Lead operation against Palestine. On the other hand, it was Kadima that ended the operation and preferred not to storm Gaza , despite Netanyahu protests. The party supports the idea of the moderate use of force against Arab terrorists and does not exclude a possibility to split Jerusalem into the Jewish and the Arab sectors.

Does it mean that the results of the new elections will make the government of Israel change its current course? Alex Goldman-Shaiman, the press attaché for the Israeli Embassy in Russia , told Pravda.ru that the parliamentary elections of Israel would determine the future politics of the country. “However, it is too early to speak about any victory now. Everything will be clear a lot later. As it is known, a coalition is required to form the future government. No one knows what kind of agreements there will be in Israel ,” the official said.

Indeed, the political situation in Israel is quite complicated. Kadima has 28 mandates, whereas Likud owns 27. Kadima and Likud will take 43 percent of the seats; the rest (57 percent) will be distributed between ten other parties. Therefore, a lot will depend on how the parties will behave with each other and which agreements they will come to.

Israel Our Home obtained 12 percent of the votes and received 15 mandates. The party was founded by Avigdor Lieberman, a native of Russia. Many Russian-speaking Israeli settlers support the party’s hard line in the dialogue with the Arabs, which puts the party closer to Likud hawks.

Ehud Barak’s Avoda also plays an important role – 13 mandates. This is a moderate democratic organization which does not mostly share the rightist views. However, when it comes to governmental positions, the party quickly forgets about its leftist ideas. Avoda could easily join Likud if necessary.

The rivals of the rightist organizations hold 14 mandates in total. They are “Arab” parties represented by Israeli Arabs and local ultra-leftist forces, who openly criticize any military actions of Israel and support Palestine’s expansion at the expense of Israeli lands.

Kadima will not be able to form a good coalition without the participation of the parties of Netanyahu, Lieberman and Barack. Will they agree to form a coalition at all? Netanyahu would not mind his own coalition, which makes his presence in Livni’s government doubtful.

Kadima’s leader may eventually form the coalition with the help of leftist and Arab parties. However, such a government will not be viable when solving matters of state importance.