A Decade of the Bolivarian Revolution

President Hugo Chávez was sworn in on February 2, 1999, a full 10 years ahead of the "Bolivarian revolution" in Venezuela. His unexpected election in December 1998, with 56% of the votes, was a response to neo liberal devastation and was a hard blow to the bipartisan oligarchs prevailing in this country since 1958 - through the pact of Punto Fijo. 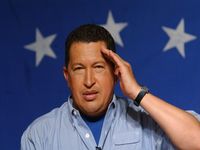 A Decade of the Bolivarian Revolution

This began a new experience in Latin America with the victory of many progressive anti-neo liberal leaders, and on the political agenda the debate on "socialism of the 21st century.”

In a decade, Hugo Chávez, who came to the government without including structured parties and consistent social movements, faced enormous obstacles. Besides the structural problems of a poor country, he was the target of the racist fury of the elites, the conspiracies of imperialism and the siege of the media. Based on popular support and a core nationalist army, he defeated the coup of April 2002, the oil lockout of December / January 2003 and countless initiatives to destabilize his government. According to recent research, 271 non-governmental organizations funded by the U.S. serve in the country with coup minded purposes.

"The straw and hurricane revolutionary"

With each new victory, Chávez was firm in his belief in the Bolivarian project. "I am only a weak straw dragged by the revolutionary hurricane," he explains. After defeating the coup of 2002, he exempted the coup generals and accelerated social programs. With the defeat of lockout, he fired the variety of directors and managers who had been made wealthy, in fact, assumed the command of the powerful oil company of Venezuela - PDVSA. He also faced the media dictatorship, not to renew RCTV's public concession and encouraging community radio and TVs. From the presidential election of 2006, Chavez announced his hybrid idea of "21st century socialism."

Several factors explain the progress of the Bolivarian revolution, with its zigzags and gaps. The first one is the radical political change in the country, with the government focusing on the active participation of the popular classes - the so-called democracy protagonists. Through the Bolivarian committees, the Mission (social programs under control of the society) and of the advice, there is a huge educational effort to engage the "excluded." Behind this movement process appears the armed forces. "Our revolution is peaceful, but not disarmed," Chavez always emphasizes.

The political debate in Venezuela is the most intense and democratic. Successive elections and the various forms of popular participation seek to overcome the weakness of social movements and the weakness of a case centered on a single leader. This contract is given to the war against media dictatorship. Recent balance sheets indicate that, beyond the four state vehicles, today there are 250 community radio stations, 24 broadcast TV under popular control, 300 periodicals and a powerful alternative to Internet network - from 640 thousand users in 2002, it jumped to 4,142 million in 2008.

Advances in the economic field

Another determining factor for the progress of the Bolivarian revolution are changes in the economic field. Initially, the process was conservative and cautious. Over time, changes have gained momentum - with the nationalization, in fact, the PDVSA, the introduction of taxes on earnings of multinationals and measures to control the flow of capital, and others of an anti-neo liberal nature. They are seeking to diversify the productive base of the country, which remains dependent on oil, and which is named for the indigenous economy. There is also a stimulus for cooperatives and social properties. Based on these measures, the economy grew on average 11.2% in the last five years.

In its recent phase, the Bolivarian revolution has accelerated the process of nationalization of strategic sectors, buying private companies in telephony (CANTV), energy (AES), steel (Sidor) and banks (Santander). The proposal of "21st century socialism" is still a piece of propaganda. Facing the grave crisis of world capitalism, which severely affects the price and volume of the export of oil, the government tries to attract the so-called productive sector. In July, a meeting was hosted with 300 businesses and a strong program of subsidies was launched for businesses. There is much controversy over the launch of a new NEP, as occurred in the Soviet revolution.

The strength of social programs

What gives strong impetus to the Bolivarian revolution, however, are the social programs implemented in 10 years. Three recent reports - "A decade of Chávez," the magazine Carta Capital, "Chávez, the ten wins and the media," the Mexican newspaper La Jornada, and "The new President Chávez of Venezuela," the French periodical Le Monde Diplomatique - show the government's effort to improve the lives of its people. The racist oligarchy, imperialism and the corrupt media today do not understand these changes. It is worthwhile to list some data from the period 1998-2007: