Russia is ready to introduce sanctions against the countries of Eastern Europe which delivered arms to Georgia during the recent war in the Caucasus. The countries still have Soviet arms in their arsenals which require regular modernization and spare parts shipments. Russia’s President Dmitry Medvedev entrusted the government with preparing a list of suggestions to cease the military cooperation with those countries that practice arms shipments with Georgia. 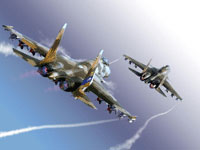 First and foremost, it goes about the Czech Republic, Bulgaria and Poland. Just like the United States, Ukraine and Israel, they were providing weapons to Georgia before, during and after the war in August 2008. Now Russia is ready to scrap its military cooperation with them.

The Czech Republic stands out from all other nations of Eastern Europe at this point. This country provided Georgia with 175 tanks and armored vehicles, over 100 artillery units, 200 man-portable air defense systems, several L-39 planes and tons of ammunition. All of the above-mentioned weapons were made in the USSR, except for DANA self-propelled howitzers and Czech-made analogues of Soviet RM-70 systems.

Bulgaria also shipped tens of mortars, fire guns, ammunition and other weapons to Georgia. The armed forces of this country have Soviet armored vehicles, missile defense systems, as well as helicopters and aircraft. This weaponry requires regular technical servicing and may come out of order without technical inspections in only several years.

Russia’s decision to introduce sanctions against the above-mentioned countries of Eastern Europe will strike a considerable blow on the armed forces of those nations. In addition, Russia will cause damage to its own defense industry too, for it receives a very good profit from the deliveries of spare parts. Russia may thus lose the Bulgarian, the Hungarian, the Polish, the Romanian and the Croatian markets because all these countries play an important role in the arming of Georgia.

Konstantin Sivkov of the Academy for Geopolitical Problems told Pravda.ru that it would be an absolutely correct decision for Russia to make. “What is more important ? Millions of dollars or human lives? If we do not scrap cooperation with those who help Georgia, our weapons will be killing our own soldiers,” the expert said.

“If Russia eventually decides to introduce sanctions, they will cause more damage to the countries mentioned above, rather than to Russia. The countries may lose a lot of their potential as a result of the possible sanctions. This is exactly what the USA does against Iran, for example”, he added.

Alexander Khramchikhin of the Institute for Military and Political Analysis shares a different opinion on the matter. “The sanctions will cause the biggest damage to Russia first and foremost. The countries of Eastern Europe are supposed to use our weapons for many years, and Russia could make billions of dollars on that. The sanctions would thus be the reason to dispose our defense products. In this case Russia may become its own worst enemy,” the expert said.

All of the above-mentioned countries still use Soviet-made weaponry. The modernization of MiG-29 fighter jets in foreign countries may bring up to 8 billion of dollars to Russia. A lion’s share of this amount can be made in Eastern Europe: there are about 150 of such fighters there and all of them require renovation.

Russia’s pullout from the market will not become a catastrophe to Eastern Europe. Some other countries will take Russia’s place immediately. Foreign companies will offer their services on very good conditions. For example, Sweden’s Gripen already eyes the aviation market of the Czech Republic.

In addition, Russia’s refusal to continue cooperation with European countries does not mean that the latter will utilize their Soviet arms. Israel has all chances to provide the technical services, for example, taking into consideration the fact that Israel has been attempting to intercept Russia’s business to modernize Soviet-made weapons.