US President Barack Obama is going to offer Russia an unexampled arms reduction plan. The plan stipulates an 80-percent reduction of the nuclear arsenal for the two countries, whereas the amount of nuclear warheads is to be cut to 1,000 both with the United States and Russia, The Times wrote. 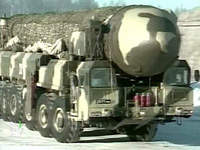 Obama also decides to revise the decision of the previous administration to deploy the elements of the US missile defense system in Europe.

The US president will entrust the talks to a special committee under the chairmanship of Gary Samore, who used to serve as a non-proliferation negotiator in the Clinton administration. The US State Department with Hillary Clinton at the head will supervise the talks.

The possible non-proliferation agreement between the United States and Russia will touch upon Great Britain with its 160 nukes and other nuclear states, the newspaper wrote.

The reduction of nuclear arms is expected to become the key issue for Obama’s team. The new US administration also plans to resume talks with Russia to replace the START-1 Treaty (Strategic Arms Reduction) signed in 1991: the treaty expires in December. The two countries were supposed to cut their nuclear reserves from 10,000 to 5,000 heads on each side within the scope of the treaty.

The news about the preparation of the START-2 Treaty appeared in the Russian media at the end of 2008 and in January 2009, but there was no specific information about its subject matter. Barack Obama, who reportedly plans to visit Russia in April, will most likely discuss the new treaty with the Russian administration.

Obama stated during his pre-election campaign that he would support the missile defense program in Europe only if the program’s necessity and efficiency was asserted. Poland’s Lech Kaczynski stated November 8 following a telephone conversation with Obama that the newly elected president of the United States was not going to decline the missile defense system plans of the Bush’s administration. However, an official spokesman for Obama’s team subsequently rejected the information.