Missile defense system too expensive and inefficient for USA

Senator Carl Levin confirmed the intention of the US administration to cut the defense spending of the Pentagon, but refused to specify the programs. However, as Levin said, he would like the missile defense program to be one of them. There is no real confirmation for the efficiency of the missile defense system, although the program has been very expensive for the United States, Lenta.ru reports with reference to Defense News. 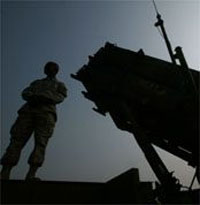 Missile defense system too expensive and inefficient for USA

Iran, which can supposedly develop nuclear weapons, is a common problem for both the USA and Russia. The cooperation between the two superpowers can change not only Tehran’s intentions, but the balance of forces in the whole world, the US senator believes. Levin emphasized that Barack Obama’s administration supports the idea of this cooperation.

At the same time, Levin said, the USA currently considers several questions to cut certain shipbuilding and F-22 Raptor programs. On the other hand, The Future Combat Systems, which deals with the development of principally new kinds of weapons and military technology, is not going to be cut.

Officials at the Obama administration previously said that the draft defense budget of the United States for 2010 would be formed after April 2009 because several expense items need to be revised. Usually, White House officials send this document to the Congress on the first Monday of February.

The Pentagon also confirmed the intention to cut the spending on several defense programs. Defense Secretary Robert Gates particularly stated that the Bush’s era, which started with the 9/11 terrorist attacks and involved the increase of defense spending, was drawing to its end.

There has been controversy among experts about whether it is technically feasible to build an effective missile defense system and, in particular, if the ground-based midcourse NMD will work.

An April 2000 study by the Union of Concerned Scientists and the Security Studies Program at the Massachusetts Institute of Technology concluded that “any country capable of deploying a long-range missile would also be able to deploy countermeasures that would defeat the planned NMD system.” Countermeasures studied in detail were bomblets containing biological or chemical agents, aluminized balloons to serve as decoys and to disguise warheads, and cooling warheads to reduce the kill vehicle’s ability to detect them.

On 16 December 2002 President George W. Bush signed National Security Presidential Directive 23 which outlined a plan to begin deployment of operational ballistic missile defense systems by 2004. The following day the U.S. formally requested from the UK and Denmark use of facilities in Fylingdales, England, and Thule, Greenland, respectively, as a part of the NMD program. The projected cost of the program for the years 2004 to 2009 will be $53 billion, making it the largest single line in The Pentagon's budget.

Russia threatened to place short-range nuclear missiles on the Russia’s border with NATO if the United States refuses to abandon plans to deploy 10 interceptor missiles and a radar in Poland and the Czech Republic. In April 2007, Putin warned of a new Cold War if the Americans deployed the shield in Central Europe. Putin also said that Russia is prepared to abandon its obligations under a Nuclear Forces Treaty of 1987 with the United States.

John McCain is a strong supporter of missile defense. In October 2007, McCain said: "And the first thing I would do is make sure that we have a missile defense system in place in Czechoslovakia and Poland, and I don't care what his [Putin's] objections are to it."