Putin scoffs at US predominance opening economic forum in Davos

The World Economic Forum in Davos is the platform where states and businesses try to find mutually beneficial solutions. The forum is especially important nowadays, when the world continues to suffer from the economic crisis. One may presume that the current crisis is a consequence of the gradual decrease of the US leadership in the world economy. The reduction was triggered by selfish and unpredictable actions of the US administration in politics and economy. 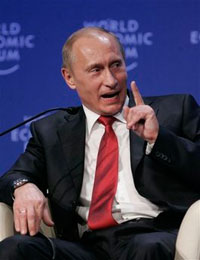 Putin scoffs at US predominance opening economic forum in Davos

The struggle between those willing to take the vacant place of the leader may result in serious conflicts. Great Britain and the British Community are the main candidates at this point.

China has no chances to become the new leader of the world. The Chinese economy strongly depends on other countries’ energy carriers, whereas the yuan will not be able to obtain the status of the world currency. It is an open secret that the term ‘finance’ virtually means papers and computer digits. Quite on the contrary, energy is real – everything comes down to energy carriers and energy systems. That is why the world expects a lot from Russia at the forum in Davos. The world wants to know what it should do. The answer to the question ‘who is guilty’ is obvious.

The World Economic Forum is an international non-governmental organization. The history of the forum began in 1971, when about 450 leaders of Europe’s leading companies gathered for a meeting in Geneva. The organization was titled the European Management Forum from 1971 to 1986. The first meetings of the forum were devoted to the issues connected with the improvement of positions of Western Europe in the competitive struggle.

The agenda of the forum was then extended with political and economic questions, the results of the scientific progress and the problems of developing countries’ debts. Influential figures from all over the world became frequent guests in Davos since the middle of the 1970s. The forum gained the status of one of the most important events of the year during the 1980s.

About 2,500 members from 96 countries of the world will meet at the World Economic Forum in 2009. Prime Minister Vladimir Putin chaired the Russian delegation at the forum and was given the honor to open the event.

The forum was a landmark event for the whole world during the 1990s, when world leaders developed the strategy for the economic development of the world. It is worthy of note that it was Davos architects that developed the world structure economy which subsequently collapsed.

The head of the Russian government will most likely try to break certain stereotypes of the forum and make the world community believe that Russia ’s role in world economy was growing.

The current meeting in Davos does not have an extensive agenda. The issues include the state of affairs in the USA and the EU, Russia’s WTO membership, China , the global energy security and the economic crisis, of course.

Putin stands for the creation of other reserve currencies apart from the dollar and the euro. However, it seems that there is no option to that for the time being.

“Excessive dependence on what is essentially the only reserve currency is dangerous for the world economy. Therefor,e it would be expedient to encourage an objective process for the emergence of several strong regional currencies in the future," he said.

Putin mocked the United States over its economic role during his opening speech.

"I just want to remind you that, just a year ago, American delegates speaking from this rostrum emphasised the US economy's fundamental stability and its cloudless prospects," he said in his speech. "Today, investment banks, the pride of Wall Street, have virtually ceased to exist. In just twelve months, they have posted losses exceeding the profits they made in the last 25 years. This example alone reflects the real situation better than any criticism," Putin stated.

The world expects a recipe of survival from new developing economies (China, India, Russia), rather than from the Western world. Putin said prior to the beginning of the forum that it would not be possible to extricate from the crisis without making fundamental changes in the world economic system.

Five days are not enough to save the world, of course. However, these days can be enough for forum members to try to understand each other, to let businesses and states agree on new rules of the game. There are no private problems in the global world.