Fidel Castro on The 11th president of the United States 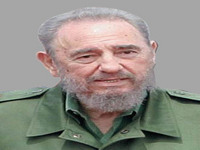 Fidel Castro on The 11th president of the United States

This past Tuesday January 20, 2009, Barack Obama took on the leadership of the empire as the 11th President of the United States since the victory of the Cuban Revolution on January 1959.

No one could doubt the sincerity of his words as he stated that he would turn his country into a model of freedom and respect for human rights in the world and for the independence of other peoples. This, of course, could offend hardly anyone except for the misanthropes anywhere in the world. He has comfortably stated that imprisonment and torture at the illegal Guatanamo Base would cease right away. This has been raising doubts among those who worship terror as an indispensable instrument of his country’s foreign policy.

The smart and noble looks of the first African-American President of the United States from its foundation as an independent republic, two and one third of a century ago, had changed under the inspiration of Abraham Lincoln and Martin Luther King to become the living symbol of the American dream.

However, despite all he has been through, Obama has not taken the main test: What will he do when the immense power he now has proves to be absolutely useless to overcome the insoluble antagonist contradictions posed by the system?

I have reduced the number of Reflections as I intended this year to avoid interfering or getting in the way of the comrades from the Party and the State as they are called to make constant decisions to tackle the objective difficulties derived from the world economic crisis. I feel well but, I insist, none of them should feel constrained by my intermittent Reflections, my health condition or my death.

I’m reviewing speeches and materials I have elaborated in the course of more than fifty years.

I have had the strange privilege of witnessing the events for this long. I receive information and I calmly meditate on the developments. I hope not to enjoy such privilege within four years when President Obama will have completed his first term.