USA’s new President Barack Obama is taking office January 20. George W. Bush was a big headache for the whole world, although his successor does not seem to be a man who can become the savior of the great nation. Those thinking that the USA will have many positive changes in its politics after Obama comes to power think it wrong. It touches upon the US-Russian relations too. 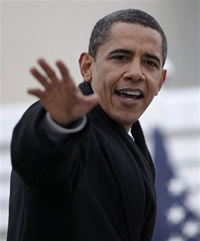 It would be wrong to think that Obama will mark the beginning of the new era in US politics. Obama became the president because one needed a scapegoat during hard times of the crisis and the new economic model, which the crisis may eventually trigger. The Republicans simply decided to move over to make Obama become an intermediate figure. John McCain was too conservative to win. If Obama does not manage to extricate the nation from the crisis in two or three years, the Reps will unveil their real candidate, and Obama’s presidency will finish earlier than expected.

Barack Hussein Obama was born August 4, 1961 in the capital of Hawaii, Honolulu. His father, Barack Obama Sr., a native of Kenya, came to the United States to study economy. His mother, Ann Dunham, a white American from Kansas, was studying anthropology. Obama’s parents met at the University of Hawaii in 1960. Obama Sr. left for Kenya alone when the boy turned two. He became an economist at the Kenyan government and eventually divorced his American wife.

Ann Dunham married an Indonesian, Lolo Soetoro, when Barack was six. The new family moved to Indonesia, where he stayed for four years. He studied at a state-run school in Jakarta. Afterwards, Obama returned to Hawaii, where he lived with his mother’s parents. In 1979, he finished Punahou School. Obama wrote in his memoirs published in 1995 that he used marijuana and cocaine when a senior student.

Afterwards, Obama moved to Los Angeles, where he studied for two years, and then became a student of Columbia University in New York, which he finished in 1983. That was the period, when Obama began to emerge as a politician and a public figure. In 1983, Obama began working at the Business International Corporation.

In 1988, Obama began to attend Harvard Law School. The New York Times wrote that he became the first black president of the Harvard Law Review during 104 years of its existence. In 1993, Obama began serving as a professor at the University of Chicago Law School, teaching constitutional law. He finished working there in 2004, when he was elected to the US Senate.

His political career began in 1996, when he was elected to the Illinois Senate. He took the position for eight years. In 2000, Obama ran for the US House of Representatives, but lost to black congressman Bobby Rush.

In 2003, Obama condemned the Bush’s administration for its plans to invade Iraq. Later on, he started running for the US Senate and was eventually sworn on January 4, 2005.

In July 29, 2004, Obama made a televised address to the National Democratic Party Convention. His speech made him famous in the United States. Obama urged to return to the roots of the American society and make the United States a country of open opportunities. He exemplified the idea of open opportunities with his own biography and the biography of his father. In the November 2004 general election, Obama received 70 percent of the vote to Keyes's 27 percent, the largest victory margin for a statewide race in Illinois history.

Barack Obama became the fifth African-American Senator in the history of the United States. Obama and Rep. Senator Richard Lugar visited Russia to negotiate the issues of the non-proliferation of weapons of mass destruction.

Senator Obama managed to gain the affection of the media and become one of the most prominent figures in Washington quite quickly. In the autumn of 2006, observers said Obama had all chances to become a presidential candidate.

Obama made a headforemost statement at the meeting in Iowa on February 13, 2007 when he criticized Bush’s politics in Iraq. He said that the lives of US soldiers in Iraq had been wasted. He had to make many apologies for such a remark claiming that it was an incorrect expression of his thoughts.

It is hard to say that Obama is Russia’s friend. He reproached Russia for its “aggressive politics” against Georgia and other neighboring states. In addition, he said that Russia’s fast economic growth and its rich energy resources made Russia very self-confident.