Welcome, President Obama. Welcome, friend! This heartfelt greeting expresses the joy and relief of billions of citizens of our world, after your predecessor and his regime sullied the image of the United States of America, insulting its Founding Fathers and making Washington synonymous in the hearts and minds of the international community, with torture, illegal imprisonment, disrespect of due legal process, breach of the law, derision for its partners, insolence, arrogance, bullying, cajoling...in short an ABC more befitting of a pariah than a beacon of freedom and democracy. 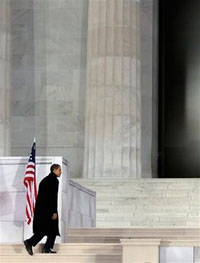 Welcome, President Obama. Welcome, friend! For a start, please remember that you were elected President of the USA, to govern your country, not the world. We did not elect you and we do not want your values imposed upon us. After Guantanamo, we do not want your freedom. After Abu Ghraib, we do not want your democracy. After supporting Israel’s multiple zionist massacres, and after smirking when Tel Aviv’s retort to the murder of civilians was “they shouldn’t have been there”, we do not want your opinions on how the international community should operate.

Welcome, President Obama. Welcome, friend! May one suggest that you begin by honouring your promise to close that seven-year hellhole, Guantanamo, a beacon of disrespect for the law and proof that the heart and mind of Washington has indeed been based upon sheer and unadulterated evil. May one suggest that do you the honourable thing, admit Iraq was a mistake, pull out, and pay reparations for the damage to human lives and property your country caused.

May we suggest that your country adopt a balanced and fair approach on the Middle East where Israel sits on 100 nuclear missiles and where Iran cannot even have a power plant. May we suggest that your ally Israel obey international law by pulling back to its original borders: No occupation, no problem. May we remind you that Hamas was democratically elected and is as much a player as anyone else in the region.

May we remind you that your ally Georgia recently attacked South Ossetia and slaughtered nearly 2.000 civilians in a shocking and cowardly act of barbarity and may we draw your attention to the fact that your predecessors snarled and growled, in their humiliation (yes, US soldiers were present among the Georgian strike force) that it was all Russia’s fault.

May we remind you that the barons behind your energy lobby have one objective, and one objective alone: to isolate Russia’s resources and to strangle her through the development of alternative supply routes. Is this a friendly stance?

May we remind you that the entire problem in Afghanistan was created by the USA’s aiding and abetting of the Mujaheddin movement, which morphed into the Talebaan and your payback was 9/11. The socially progressive government in that country had seen its people reach new heights of opportunity, which was all swept away under the watchful and able eyes of Messrs. Cheney and Rumsfeld and company, back in the 1980s.

May we remind you that there are 47 million Americans living without a healthcare plan, that you are the only industrialised nation without a universal healthcare system. Maybe it would be a good place to start, at home, where you were elected. Then Mr. President, if you would kindly clear up the mess your country has created, it will be time for us to start listening to you again.