The Tower of Babel of the European left 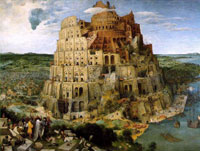 The Tower of Babel of the European left

(Paris) The great tower stands like a beacon over Europe. Evenings from my bedroom window I watch the magnificent tower illuminate. As day ends the searchlight at the top at 1000 feet altitude begins sweeping the sky. During last year’s French EU Presidency, as daylight departed and night fell, the gigantic iron structure progressively turned blue.

A magic moment for prescient dreamers fascinated by towers and overviews. Nostalgic views, too, which might also end in illusion, in mirage and chimera.

Like the dreamers-stevedores who down the street from me staged a manifestation against the firings of port workers. Returning home with my baguette, I found them there. A hundred or so of them from various ports from Normandy to Bretagne. Their red flags waving, drums beating, loudspeakers blaring, police nonchalant and permissive. I watched a while before turning homewards. I was only a few steps away when I heard it, the Internationale. I went back and joined a group of stevedores from Normandy . They smiled at me when I took off my cap and began faking the French version. It was composed in French in 1888, then translated into 85 languages. The hymn of international Communism, sung also by Socialists, Social Democrats and Anarchists, the Internationale was the hymn of the USSR until 1944 as it was of the student revolt on Tienanmen Square in 1989. It has always been a hymn of revolt.

2008- THE AUSTERLITZ OF SOCIAL-DEMOCRACY

In a recent article, Le Monde called the year 2008 the Austerlitz of Social-Democratic thought. The reference is to the great battle in Moravia where on December 5, 1805 Napoleon destroyed the armies of Russia and Austria . Last year French Socialists lost miserably in national elections that swept conservative Nicolas Sarkozy into power. Also in 2008 the French Socialist Party succumbed to the market system: for the first time since its foundation in 1905 it abandoned references to revolutionary slogans. Already in 2005 the French Socialist Party had adopted a Social Democratic program: adherence to European unity and acceptance of the reformist idea of the market economy.

That surrender of principles initiated the decline of the Socialist Party in this country. The party is split between pro- and anti-“Europeans” and between partisans of the market economy and defenders of a regulated economy. This division reflects the fundamental division of modern French Socialism since its foundation in 1905: between orthodox Marxists hostile to reformist ideas and the impulse of the main body to participation in government. That is the dilemma of European Socialism: revolution or reformism—and acceptance of the capitalist system.

The abandonment of 19th century Socialist principles is referred to as “going to Bad Godesberg.” The reference is to the congress of German Social Democrats in 1959 in the small town near Bonn when the German party abandoned the class struggle. That congress changed the face of German Socialism from that which had emerged from the party congress of 1925 (after the disasters of European Socialism as a consequence of its support of war during WWI) where Socialists again invoked the class struggle, the nationalization of the means of production and the role of the State in the economy.

At Bad Godesberg German Socialists decided that the political program of Karl Marx and Friedrich Engels would be their “reduction to a sect” on the German political scene. Revolution or evolution was the question. German Social Democrats chose the latter.

Bad Godesberg split European Socialism. Italian Socialists (and Communists) still refer to the Bad Godesberg landmark. Especially since also the bulk of Italian Communists have now made the ideological journey to that German town. Likewise British Socialists of the Labour Party under Tony Blair paid homage to Bad Godesberg in 1995, one year after Blair’s rise to power, 26 years after Bad Godesberg and 77 years after the birth of the Labour Party. Blair restructured the party after 15 years of the Thatcherite revolution. Blair’s Labour abandoned its Marxist credos dating from the October Revolution in Russia and erased the party’s ideological past. Scandinavian Social Democrats have long been reformists.

While the European Right gloats, today’s Left reality is indeed sad. Disarray reigns in most every party of the Left, in Europe and in the USA —Socialist, Social Democrat or Communist movements. Disarray also in what the Left is. Too many ambitious leaders some places, too few in others, while Anarchists deny the necessity of leadership at all. Insane concept for the Left! For people do not act alone. One needs leadership. In Europe the situation is clear: the result of the lack of unity and leadership is the decomposition of the Left into splinter parties and groups.

In Italy three “parties” use the name Communist. Divided by a name, by a symbol, by personal ambitions projecting incompatible ideas. Italy even has a Socialist party on the Right. It has a so-called Social Democratic party that exists one day and vanishes the next. Despite the stirring Internationale, despite the ideals of worker unity, despite nostalgia for the old Communist Party, there has seldom been unity on the Left.

Disunity is the rule. No doubt about it, the Left is on the ropes. While the Right holds sway in most of Europe, the Left is a political mess.

The Left role today is limited chiefly to holding its finger in the hole in the dike against the flood of the rightist market-cures-all, capitalistic, globalist, anti-social credo sweeping over the Continent. Though “the European Idea” of the social state still holds, it is leaking water on all fronts. The new Europe of multinationals and market economies is gnawing away at all sides of “social Europe.”

WHERE WE STAND TODAY

As the stevedores sang that day in Paris , Socialism means struggle. The question has always been, how is the change from Capitalism to Socialism to be brought about? Reform or revolution. Mankind’s basic social struggle has long been between the bourgeois capitalist class and the proletarian working class.

Modern Socialism began with the French Revolution and its slogans of Liberty , Equality and Fraternity. Socialism emerged in opposition to inequalities and social injustice that has marked Capitalism since the Industrial Revolution, and to free market philosophies and the same associated social ills of today.

Though Socialism/Communism has changed, Capitalism has not. It is still the exploitative class described by Marx. Since the Industrial Revolution, one has learned that trade unionism is NOT Socialism. Though anarchism shares many aspects of Socialism, the two cannot go the distance hand in hand. The movement for radical change requires unity and leaders. An array of sects cannot bring about social change.

Reform or Revolution? For example: one wonders if France was close to revolution in 1968? I doubt it. The bourgeoisie was in command while, as today, the Left was split between Communists and myriad Socialist and Green groups, student movements, trade unions, each acting alone.

The start of the modern class struggle was the Communist Manifesto of Marx and Engels, the revolutions of 1848 across Europe and the birth of Social Democratic parties at century’s end. Socialism’s birth was however divisive. The great dichotomy was the split between Communists and Social Democrats/Socialists. Early Communism was considered too atheistic, one reason for the rapid spread of Socialism in West Europe . Engels noted that while Socialism became respectable and salonfähig, Communism did not because of its insistence on total system change, the overthrow of the capitalist system.

UNITY, OR LACK OF IT

The First International founded in London in 1864 was the first major attempt at organization. Coexisting within the early Socialist movement were trade unions, agrarians, anarchists, divided among themselves however by market ideology and the gradualism of some and the revolutionary ideology of others. Three years later the Social Democratic Workers Party was founded in Germany , today’s SPD. Then as now its divisions and differences were based on the question of reform or Revolution.

By an irony of history reformists were strengthened by the tragic outcome of the revolutionary Paris Commune in 1871 at the end of which 20,000 revolutionaries were shot a few steps from where the Eiffel Tower stands today.

A few years later, in 1889, while the Tour Eiffel was rising on the banks of the Seine, the Second (Socialist) International was founded in Paris by delegates from 20 countries representing Socialist and labor organizations. Then, the German SPD, which had grown enormously and had hundreds of publications gained one-fourth of the national vote, in its bid for political power becoming less revolutionary. Yet Marx himself was encouraged by the SPD and its 4.5 million votes, which became the most powerful Social Democrat party on the Continent.

Marx apparently believed in a peaceful transformation of society in some places. In others not. It seemed possible in England, Holland and America, but not in France which after the crushing of the Paris Commune was tightly in the hands of the military-bureaucratic machine: French Capitalism would have to be overthrown by force.

Gaither Stewart, Senior Contributing Editor for Cyrano’s Journal/tantmieux, is a novelist and journalist based in Italy, now on a three-month stay in Paris. His stories, essays and dispatches are read widely throughout the Internet on many leading venues. His recent novel, Asheville, is published by Wastelandrunes, (www.wastelandrunes.com).