Russia and EU sign gas protocol – now all depends on Ukraine. International commission to be set up to monitor Russian gas transit through Ukraine. The gas problems are over, pending Ukraine’s signature – the country that started the problem in the first place...as usual, unreported in western (dis?) information sources. 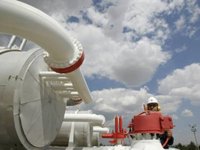 Igor Sechin, Russian Deputy Prime Minister, Aleksei Miller, CEO of Gazprom and Martin Riman, Trade Minister of the Czech Republic, hosting the EU Presidency, signed the document which sets up an international commission to monitor the points of entry and exit of Russian gas through Ukraine, which for reasons beknown to Kiev once again interrupted the European Union’s gas supply, against the fundamental precepts stipulated by Russia in all contracts, namely guaranteeing a service without interruption.

Russian Prime Minister Vladimir Putin had demanded that such a commission be set up to verify once and for all who was to blame for the cutting of Russian gas to Europe: Ukraine, not Russia. Russia has insisted all along that the supply of its gas to the European Union be guaranteed, while Ukraine cut the pipelines. Yet in western media outlets, imagine who is blamed?

The international commission will include members from Gazprom (Russia), Naftogaz (Ukraine), the Energy Ministries from Russia and Ukraine, The European Commission, European consumers and international monitoring organizations. Russia and the EU have agreed to the setting-up of this commision, now everything depends on the Ukraine.

Regarding the theft of Russian gas by Ukraine, Vladimir Putin stated that “If we notice that gas is stolen again on Ukrainian territory and part of deliveries vanish, then we will reduce supplies by this volume”.

Russia considers that the latest crisis in Russian gas supplies was caused by a “clan war” inside Ukraine, with sides vying for economic importace in the run-up to several elections processes. This, the real cause of the crisis, was predictably not referred to in western news sources, if indeed they deserve such a title.