To Hell With the Human Being

The media supposedly denounces the attacks (in the eyes of some), but continues with quite strange assumptions. They give the label "radical" to Hamas, but not Israel, which has killed 500 people in ten days, according to conservative data. Many children. Many women. Many innocent people. 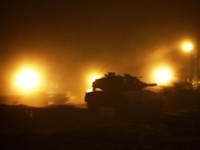 To Hell With the Human Being

Doing that is a mistaken policy, and it does not resolve in agreement to show "forgotten" history, and a neo-Nazi policy of ethnic extermination - Israel is not branded "radical" by the news.

A pity that even in GloboNews (for an example), in which historians and sociologists are always a little smarter, especially in the Millennium and documentaries bought from foreign broadcasters, they give this shameful treatment to information, so valuable in times of war.

On the contrary. The presenter of the economic news almost smiles while informing that the conflict in Israel made the Bovespa close up. The economist heard on this channel Monday (5 / 9) - always a neo liberal - confirms exhaustively: the Petrobras shares are "pumping" in the financial market. It is as if they said: "To hell with the human being.”

The comments are done in totally free form: they are not treated as human beings. There are only variations of commodities due to the variation of "external factors," between them the ethnic extermination of a people. The presenter does not find that abnormal: she celebrates the year of 2009, which "was surprising" with all these "positive indicators".

In this bleak scenario in the Brazilian press, as a little more humanist citizen can track daily, from their critical sense, it only remains to protest and we recall the thought of Sophocles (495 BC-406 BC), the Greek playwright: "When will they call for force to stop the injustice and tyranny when respectable citizens were silent?