Obama Not ‘the First Black President of the United States’ 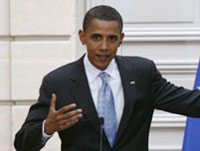 Obama Not ‘the First Black President of the United States’

It is widely known that Obama’s mother is white (from Kansas in the states) and his father is black (from Kenya). So, by racial makeup, it is more correct to call him a “biracial” (or racially “mixed”) individual.

On the other hand, if someone is 95% “white” in her racial makeup but 5% “Asian” and/or other, it is not correct to call her "biracial" or "mixed;" instead, it is more appropriate to call her a “white” individual, by racial makeup, even though she is not absolutely 100% (or pure) by racial makeup. After all, purity or 100% absoluteness is quite rare in life, if it exists at all.

This is generally true for things in life, in that when we use a term, it does not have to be absolutely “100%” in correspondence to reality, but only as an “approximation.” But when the reality is too far from the meaning of the term (as an “approximation” to reality) in accordance to its conventional usage at a given point in history, then the test of approximation fails, and another term is needed.

Now, one can argue that this label like “biracial” or “mixed” is only for racial makeup but does not tell us the social “identity” of the individual in question, both by himself and others in culture and society. This argument is valid, since an individual may have one racial makeup but prefers to identify with another “race” for different reasons, be they cultural, social, personal, or something else in his own way of rationalization.

In this sense, Obama may identify himself as a “black,” a “white,” or a “biracial” (“mixed”) individual, even though his racial makeup is half-white and half-black (and therefore, “biracial” or “mixed”). But this should be no excuse to mix up the use of language by calling him “the first black U.S. president,” for the simple reason that he is not, biological speaking.

In all these three possible cases, it is incorrect to simply call him “the first black U.S. president,” for the reason that he is not, as explained above.

In fact, this argument can also be extended to another related label which has been circulated in mass media, in calling Obama “the first global U.S. president,” because of the few years that he spent in Indonesia when he was a little kid (and also that his father is from Kenya). Again, this is also incorrect. Obama never has any “global” life experience abroad at all; instead, he has spent almost all of his entire life in the states. To say that someone has a “global” experience really means that his life has been spent all over the world, although this does not have to mean that he has lived in every single country on the planet Earth.

Words are used correctly, even when they often refer to reality as an “approximation,” but this should be no excuse to exaggerate or abuse it, totally out of proportion, to the point that the word is far from the reality that it is to refer to—unless it is used as a metaphor or something else (but then, the word would no longer mean what it is literally supposed to mean).

Of course, in politics, words can at times be twisted in meaning, totally out of proportion, to suit the ulterior purposes and interests of certain groups. After all, one can simply say, “It is politics, stupid.” Even then, however, it is one thing to say that a person can abuse a word for “political” reason, totally out of proportion—-but it is another thing to say that the meaning of the word therefore correctly describes what it is supposed to refer to, in accordance to its conventional usage at a given point in history, even when this is not so at all.

This debate may sound academic, but it can have enormous practical implications for the world that we live in. Try to imagine what our world would be like, if, all of a sudden, everyone were to abuse words in whatever ways he sees fit in daily communication, totally out of proportion. History would then be totally revised ceaselessly to the point that it would only be a question of time for the people in this imaginary world to become mentally unstable.

About the author: Dr. Peter Baofu is an independent scholar in the states, who has written 20 books (as of 2008) in numerous fields. He can be contacted by email.