Japan wanted the US to nuke China in case of war

The government of Japan offered the United States to strike a nuclear blow on China without hesitation in case of war in the Far East in the 20th century. Many Tokyo’s newspapers published shocking reports about the declassified documents of the Japanese Foreign Ministry dated from 1962-1974. 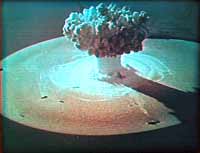 Japan wanted the US to nuke China in case of war

One of the documents says that then Prime Minister of Japan Eisaku Sato had a meeting with then Pentagon head Robert McNamara in January 1965. The Japanese prime minister offered Washington to strike a nuclear blow on China from if the two Asian nations went to war. The minister’s statements made during the meeting virtually approved the import of US nuclear weapons in Japan in case of emergency.

On the other hand, it was Eisaku Sato, who proclaimed the so-called three non-nuclear principles in the Japanese parliament in 1967: not to possess, produce or allow the entry of nuclear weapons. Sato’s anti-nuclear campaign earned him a Peace Nobel Prize in 1974, Itar-Tass reports.

The documents have thus cast a shadow on the sincerity of Eisaku Sato and all of his successors. The incumbent government of Japan released quite a dubious statement to explain the shocking publications. Chief Cabinet Secretary Takeo Kawamura (official No.2 in the Japanese government) stated at a press conference in Tokyo that the USA had not delivered its nuclear weapons in the country because Washington had never made an official notification of that.

The government of Japan has been previously accused of turning a blind eye on US warships and submarines with nuclear weapons on board arriving at the nation’s ports. A well-known scientist of politics, Takahiro Tanaka described such a stance as the great deception of the nation which had suffered the nuclear bombings of Hiroshima and Nagasaki.

China has been paying a lot of attention to the growth of the nuclear potential recently, which the US administration does not leave out of its attention, of course. The Committee on International Security of the US State Department pointed out the danger of China’s growing nuclear arsenal a year ago. The committee published a report, in which it was said that China was capable of striking a serious blow on the United States, which did not let the US administration interfere into the possible conflict between Taiwan and China.

There is a different point of view on the matter, though. Beijing feared an attack from the USA and from the USSR during the second half of the 20th century, The Guardian wrote. However, China has never taken any efforts to overcome the enormous nuclear arsenals of the two superpowers. China was only prepared to strike back. The essence of the Chinese policy has not changed during the recent years - the nation still follows the containment policy, the newspaper wrote. China increases its nuclear potential to match the balance of forces of the 1970s and the 1980s, for the USA has increased its military resources since then, having undermined the correlation of forces of those years.