The USA has been the chief supporter of Pakistan for the past several decades. During the Russian occupation of Afghanistan, the USA funneled vast amounts of war materiel to Afghanistan through Pakistan, and much of that war material was diverted, with US permission, to Pakistani Terrorism against India. The USA actually created Al Qaeda, and Osama bin Laden worked as a CIA asset in Afghanistan and also in Kosovo. 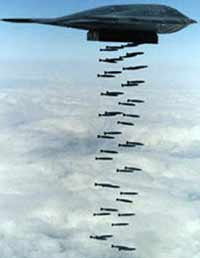 During the past several decades the US government and the CIA have not only turned a blind eye to the Pakistani government's support of Terrorist training and Terrorist attacks against India, but the ongoing financial, training, and logistical support which the USA has provided for Pakistan shows that the USA has been a willing co-conspirator with the Pakistani government's efforts to attack and destabilize India.

Saddam Hussein was hired at the age of nineteen to work as an assassin for the CIA, and after Saddam's bungled assassination attempt against the Iraqi President, Saddam retreated to Cairo, where he was a frequent visitor to the US Embassy, and Saddam remained on the CIA payroll. During the Iran/Iraq War, in which more than a million people died, the USA openly supported Iraq and secretly supported Iran with arms sales as part of the CIA's illegal Iran/Contra operation. 'Divide and Conquer' is the game that the USA played during the Iran/Iraq War, and today the USA continues to play 'Divide and Conquer' with Iraq and Iran.