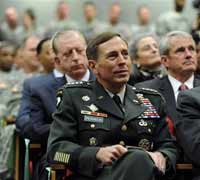 “The HTS program is a ridiculous waste of tax payer money, and in the midst of a recession. Millions have been wasted. And the moronic management of the HTS program seems to have absolutely no problem placing poorly trained individuals in harm’s way, going so far as to falsifying training documents.”

“The amount of cash flying around the HTS program with very little oversight or accountability is disgusting. I continue to work for the HTS program out of obligation because I finish what I start, but trust me, I am counting down the days .”

“I feel for the people whose careers are being ground up in this HTS program mess.”

“ It never ceases to amaze me how many egotistical individuals are involved with this HTS program.”

Thus far there are 24 sources (four quoted above) for this series on the US Army’s Human Terrain System (HTS). Of those 24, only a few have been adversarial in their correspondences. Adversarial though some were, they provided information that was useful for vetting and cross-checking. The number of sources behind this effort is significant because it puts paid the notion that the articles are based on the rumblings of just a few individuals. Sources are located in the USA, Iraq and Afghanistan. All are intimately familiar with the HTS program which is, in the Pentagon’s world—a comparatively miniscule project.

Others side with this view: “I am really distressed to hear about all these problems. I am sure that HTS started out with somebody's good intentions, but it was never properly thought through. One thing I learned about 25 years ago when working on an intelligence problem surrounding a presidential assassination attempt is that human psychology is the same for all peoples, everywhere. And, you can pick up a lot of it by studying history and military tactics.

It isn't really necessary to bring in academics to try to understand psychology, except perhaps for rare pathologies that are not likely to be encountered in everyday life [evolutionary psychology can speak to that]. Where HTS could have helped a lot is in understanding cultural norms and they did try to do that. But it seems to me that HTS over-promised when they claimed that they could help front-line tactical troops with specific situational awareness problems. The key thing to remember is that the differences between any two humans' behaviors will be greater than the differences in behaviors between cultures.”

There is another approach that the military could arguably have adopted to explore the human terrain and it has been tested and used in every major city in the USA. Community Policing and, post-911, Homeland Intelligence Policing practices have been successful in helping US law enforcement adapt to changing economic and cultural dynamics (for example working in dual language communities with Muslim, Albanian, Russian, Latino sectors) and combat gang warfare, drug trade, white collar crime, and theft. US law enforcement’s procedures, lessons-learned, information collection techniques, cultural awareness practices, and standardized interaction methodologies for diverse urban populations are far more nuanced and robust than anything that anything that HTS program entrepreneurs—and one has to assume CENTCOM CG General David Petraeus and SECDEF Robert Gates-- could hope to design.

Up north in Canada, for example, the Royal Canadian Mounted Police (RCMP) authored a nice briefing titled National Security Community Outreach Program. The Canadians have been years ahead of the USA in formalizing diversity/cultural practices into their national security practices. The Outreach Program brief is chock full of statistics showing everything from national immigrant trends in large cities to a discussion of sources and the need for enhanced Cultural Awareness Training. Down south, the New Jersey State Police have an exceptionally detailed manual on Intelligence-Led Policing that includes a description of a database not unlike the one envisioned by HTS program management (MAPHT). Even the US National Crime Prevention Council promotes the need for law enforcement to gain the trust of local leaders, groups/individuals to minimize violence (these documents are available via any Net search engine). In short, the formula for success, maybe, was not to be found in the recycled hearts & minds literature of the 1960’s produced by the HTS program’s founders, but was right here in the USA in the form of Community/Intelligence Policing as developed and practiced by US law enforcement.

The US Army’s HTS is a woeful attempt to be a Community Intelligence/Policing program for the US military. It was supposed to help US military commanders/frontline warfighters divine the why’s and wherefore’s of an alien culture (why do they hate us/want to blow us up?). Not unlike the Community Intelligence/Policing programs here in the USA, one assumes that the HTS program goal was violence prevention and some sort of mutual rapport with local groups. Non-inflated metrics for the HTS program would undoubtedly show minimal success in these areas. Further, the information the HTT’s provided to command elements was always going to find its way into the intelligence and kill-chain. To think otherwise was always folly. Organizations like the New Jersey State Police have designed procedures and practices to deal with those issues (arrest chain) from a US law enforcement perspective.

The concept of the HTS program highlights a greater problem. Most Americans are culturally and geographically illiterate. That speaks to a public and private US education system that is failing to teach its children that other nations exist with peoples that tend to view the world a bit differently Moreover, the entire program ignores recent findings courtesy of Evolutionary Psychology/Cognitive Neuroscience that explain in large measure how and why humans act in situations/environments (for these matters the author’s brief Framework for Strategic Cultural Analysis presented in the UK is available upon request)

And for those who believe that the combat zone/are of operations is in no way compatible to what US law enforcement faces in major cities--and that there is nothing to be learned from them--consider that in 2007 at least 16,000 Americans were brutally murdered. In November 2008, an FBI Agent—a former Baltimore, Maryland Police Officer, Teacher and father of two--was serving a warrant in Pittsburgh and for his troubles was shot and killed. Was his service any less important or noble than that of those who are uniformed US military?

Finally, where is the US Department of State? Shouldn’t their in-country teams in embassies and consulates be providing the type of information that US military commanders seek from HTT’s? Perhaps President-Elect Barak Obama and US SECSTATE designate Hillary Clinton can de-militarize US diplomacy and adequately fund/staff the US State Department. That or at least balance the scales.

New information received indicates, definitively, that the Georgia National Guard retired general referred to in the last HTS article, though not by name, did not get sacked as was reported. Major General Robert Hughes (Ret.) resigned because of problematic issues with the HTS program. Many of those problems have been broached over these last eight articles on the HTS program. Sources indicate that confusion over the details arose, in part, due to COC matters. The way the HTS command structure was designed by Program Manager Steve Fondacaro—or not designed as the case may be—led to confusion over who reported to whom, or what and when.

“Hughes voluntarily submitted his resignation because he did not want his name associated with the program; same for Troy Watson (HTRAC Executive Officer), and William McCallister (HTRAC Social Scientist ). They were in positions to lead with no one to follow. HTRAC is at Corps level, HTAT at Division, and HTT at Brigade; however, there is no command relationship…”

More troubles in Building 48 are described thus: “HTTs are not responsible to HTAT or HTRAC so there is no oversight in what is being accomplished--if anything. Those Teams that submit their weekly reports to Building 48, Fort Leavenworth , receive no response or support. The on-going joke was that you could submit old reports with a different date and no one at Building 48 would notice because the reports were never reviewed. ”

Internal conflicts continue to abound within the HTT’s themselves. Here is a description of the ongoing HTT soap opera located in Baghdad. “ HTAT IZ B ran into problems immediately after arriving because the resident G-7, a Lieutenant Colonel, and his staff had no idea how to use the HTAT. The G-7 did not like Fondacaro for, maybe, personal reasons. The G-7 would not let the HTT depart Camp Liberty to meet locals or the five other HTTs. This makes it very difficult to collect raw socio, economic, or cultural data, and perform analysis and prepare recommendations for the Division Commander. The G-7 uses the HTAT as office-help to update Power Point slides for Staff Officers . Five of the six HTT members apparently work very well together.

However, the sixth member , Major E, allegedly transferred from the US Air Force to the US Army because of her discipline and security problems in the US Air Force. She almost did not deploy to Iraq because she was allegedly unable to get a security clearance until the week prior to deployment. As a research manager, she was known for taking credit for other HTT member’s findings or for not being honest. She went out of her way to be part of the Green Machine and alienate her HTT by spreading false stories about HTT members. The joke became: Do you know how to tell if Major E is lying? Answer: She's talking. The Deputy G-7, another Lieutenant Colonel, cautioned the HTT leader to watch out for Major E stating, ‘I think she wants to be Team Leader and has a problem working for a civilian contractor.’”

According to sources, the Leadership of the HTS program at Fort Leavenworth “ consists of retired O6’s or friends of the retired O6’s. The current leadership consisting of Steve Rotkoff, Mark French , Karen Clark and Angela Edwards (the information technology manager), have had ongoing friendships in excess of a decade. Rotkoff was a cadet classmate with the previous HTS deputy program manager, Jim Greer, at West Point . Edwards’ husband, a recently retired O6, will be coming onboard the HTS program in December 2008 as a Seminar Leader. There is a great divide amongst the leadership and the military staff.”

Sources also state that the contracted leadership views the military as a necessary evil. The contractors “display a total lack of respect for even the most senior military members within the HTS program. The separation is also true with regard to operational planning. The uniformed/active duty military is seldom, if ever, included in any senior level planning within the program. However, they are expected to act, and act quickly, whenever a directive is put out.”

For example, according to sources, Rotkoff’s management style is summed up in this statement attributed to him: “if you get in my way, you’ll piss me off!”

Sources say Rotkoff has absolutely no problem dressing down colleagues in public. To date at least three uniformed/active duty military members, including a Lieutenant Colonel, have received a public tongue lashing from the civilian contractor Rotkoff.

“People that have questioned the program and pointed out problems have been returned to the USA. Some have been sitting in hotels in Kansas City for three weeks or more, waiting for meetings to be scheduled. It's as though HTS program management is saying there is nothing wrong with the program if they do not meet with them. It also keeps the numbers inflated on personnel status.”