Barack Obama prepares to move into the White House. He does not know what challenges he will have to face as the new president of the United States, although he does realize that the USA has lost its function of the only guarantor of global stability. Russia has appeared on the other side of the world as the newly revived nation. Barack Obama and Dmitry Medvedev will have to meet each other some day for talks about new forms of cooperation under new political circumstances. 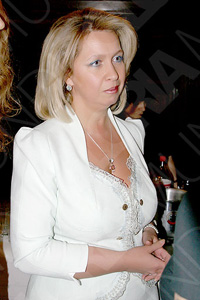 The general public usually pays a lot of attention to first ladies, who play one of the most important roles at unofficial events organized for such first meetings between world leaders. Svetlana Medvedev and Michelle Obama will have to produce a positive impression on each other. If they succeed at that, the relations between Russia and the United States will become a lot warmer. The two first ladies have an enormous influence on their husbands, to which Mr. Medvedev and Mr. Obama confessed on many occasions.

Svetlana Medvedev (maiden name Linnik) was born on March 15, 1965 in the cultural capital of the USSR, Leningrad (now St. Petersburg) into a military family. She studied at a common secondary school where she met her would-be husband, Dmitry. She was a straight-A student and participated in various school events on a regular basis.

Svetlana graduated from the Department for Statistics and Economic Analysis of the Leningrad Financial and Economic Institute. She married Dmitry Medvedev two years after her graduation. She took great efforts in helping her husband with his career and succeeded at lot at that. When she became Russia ’s First Lady, she said that she had obtained a new job as the First Lady after her husband’s election.

Svetlana and Dmitry Medvedev have a son, Ilya, born 1995. He is fond of computers and fencing.

Svetlana is great friends with the head of the Russian Silhouette Fund, Tatiana Mikhalkova, and the wife of fashion designer Valentin Yudashkin. Most likely, Svetlana consults the renowned designer regularly because she tries to look immaculate all the time. She prefers ivory white dresses and suits. Her clothes reminds those by Yves Saint Laurent, although official sources say that she orders her outfits at the presidential tailor shop in Moscow’s center.

Financial records say that Svetlana has not received any income during the recent four years. She only has 380 rubles (about $14) on her bank account. She owns an old Volkswagen Golf and a garage.

Michelle LaVaughn Obama was born in Chicago on January 17, 1964 into a family of a plumber and a housewife. The parents were lucky enough to place their daughter at one of the most prestigious schools of the city, at which Michelle attended cooking and literature classes.

Like her husband, Michelle has always been a book worm and a careerist. She graduated from Princeton University and Harvard Law School . She met Barack Obama at a law firm where she began to work after her graduation. Michelle and Barack were the only two Afro-Americans working at the firm. They started dating and eventually got married in 1992. After the wedding, Michelle started working in the Chicago city government as an assistant to the mayor. In 2002, she began working for the University of Chicago Hospitals, first as executive director for community affairs and, beginning May, 2005, as Vice President for Community and External Affairs. She always carries two cell phones with her – one for family and the other one for business calls. She never switches them off.

Barack and Michelle Obama have two daughters – Malia (born 1998) and Natasha (known as Sasha, born in 2001). Michelle says that her husband won’t pick up his dirty socks and never lets the girls crawl into their parents’ bed in the mornings.

Michelle prefers simple and bright outfits that are typical for the wardrobe of an average Afro-American lady. She has never had any specific preferences in clothes as far as brands are concerned. However, she once said that she was a fan of Giorgio Armani’s designs.

Michelle Obama has always been a good earner. In 2006 she made $326,818, which made her the biggest earner in the family. However, Barack had written several autobiographical bestsellers by that time and received over $3.8 million in fees by the beginning of the presidential race.