The British Broadcasting Corporation prepared a program which gave evidence of Georgia’s crimes committed against the people of South Ossetia. Tim Whewell, a BBC correspondent, visited the region, where the battles took places in August of this year, and interviewed eyewitnesses of those events. The program was aired on the radio October 28, the BBC reports. It has also been uploaded on the website of the company. 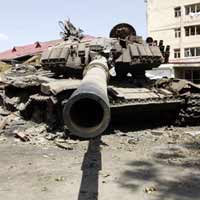 The program features eyewitnesses’ statements, who said that Georgian tanks were shelling their homes while Georgian soldiers were shooting civilians who were trying to escape from the battlefield in their cars. The correspondent said that Human Rights Watch employees, who visited South Ossetia, also obtained the evidence to prove the disproportionate use of force by the Georgian military.

Eyewitnesses told the BBC correspondent how their children were dying in their arms of injuries. A woman said that a Georgian tank stopped near the five-storeyed apartment block, in which she lived, and started to shell every floor of the building one after another. “They were shooting from heavy guns, not from assault rifles. The shells were exploding ,” the woman said.

Marina Kochiyeva, a doctor of the Tskhinvali City Hospital, said that she and her three relatives were trying to escape from the city on August 9 at night. The Georgian military opened fire at their car, the woman said. The car veered off the road and stopped, but the military continued shooting, she added.

The woman showed the correspondent the place, where the incident happened. The carcass of the car was all covered with bullet holes. The doctor said that one of her nurses died under similar circumstances.

Georgian President Mikhail Saakashvili has already responded to the BBC’s report. He said that he denied all charges against the Georgian military and added that his country was open for any investigation. “If someone committed war crimes, then it was not us,” the president of Georgia said.

“We strongly deny everything of what has been said, all war crimes charges. But of course, we are open to any comments and any investigation. We urge to conduct an international investigation of the war, the circumstances that made the war and the incursion happen,” Saakashvili said.

Britain’s Foreign Secretary David Miliband told the BBC that Tbilisi’s actions were irresponsible, although he continued with saying that Russia’s response to the Georgia-led aggression was disproportionate and incorrect.

Daniel Fried, Assistant to the US Secretary of State, said that the USA had repeatedly warned Georgia of the inadmissibility of the use of force against South Ossetia. Fried said that he was not certain whether the Georgians attacked the civil population of South Ossetia indeed, although the actions of the Georgian army raised serious concerns with the US administration.

Georgia invaded the then-unrecognized republic of South Ossetia August 7. Russia responded to the Georgian aggression immediately by sending its troops to South Ossetia to defend the local population.

The conflict triggered the most serious crisis in the post-Cold War relations between Russia and the West.