The Bank Panic of 2008 and the Death of NATO 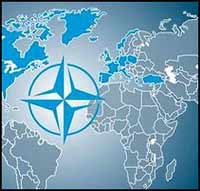 The Bank Panic of 2008 and the Death of NATO

NATO was originally designed to keep Germany down, America in Europe and the Soviets out. With no Soviet Union, NATO's purpose, like that of all good bureaucracies, has mutated. It has reneged on its promises to Russia not to expand eastward and has expanded eastward into some rather questionable regimes, particularly in the Baltics. All the same, as it was declaring Russia a useful partner, though a minor one not worthy of ever inviting in, it sought out a new purpose.

The purpose was found on first the battle fields of Bosnia and than later in the air over Serbian cities, where civilians were massacred to the back pats of "job well done" from NATO. Of course, this was all done with major arm twisting by the Americans of a reluctant European NATO. It would seem that defending and militarily supporting Islamic jihadists was something that Dhimmi Washington was much more apt for than the Europeans. However, the USD won hands down and Europe went along, just like it went along to Afghanistan.

Afghanistan was and is the first real NATO fighting war. No longer is this primarily NATO bombers dropping bombs, often on civilians targets, from 3,500 meters, no this is a fighting war with a jihadist guerrilla force, trained by the very same NATO experts. Afghanistan as a whole has already shown NATO to be an empty shell. Many of the members have opted out of contributing anything to the conflict and quite a few that have sent soldiers have sent them with such strict rules of engagement (ROE)s that they are all but useless.

To the Anglo-American Neocons, this of course was a disaster. Their grip on power over Europe and thus the EU in general, was cracking. Add to this the economic knots tied by Russia to several key members, using the very real ropes of energy and business investments, and NATO was opting to be nothing more than a sewing circle.

The Anglo-American Neocons had to take bold action, something that would cause the member states of NATO to recoil back under the Neocon umbrella and unify against a common enemy. But whom? The Muslims showed little ability to project military power into Europe, they do much better with immigrants. The Chinese were out of the question a general rule, way to much elite money at risk for that kind of nonsense. Thus there was only one clear choice: Russia. But how to resurrect the Soviet Union, or at least it's shadow?

Enter stage right, a small time Georgian dictator and one not to bright but very egotistical. The perfect dupe: Saakashvili.

Apparently convincing Saakashvili that exterminating an autonomous province full of a minority that was at once not only protected by Russians but who were 90% Russian citizens, was not a difficult concept, even though he must have known that there was a very large chance that things would turn out just how they turned out. How much and what kind of aid was promised to the Georgian leadership will always be a mystery. What is known, from this writer's first hand knowledge, is that the Georgians have been expecting America to fight a war with Russia for them, since 2001, from the times of Shevardnadze.

Of course, the over stretched US and UK had no plans to ever start a war for Georgia but Georgia was central to their plans to start a war for them. Start a war it did, however not only did the Russians react but they reacted with lightening speed, destroying the Georgian war machine in 2 days and absolutely routing the Georgian forces into a full retreat. In small nations there is precious little space to retreat to.

The Angl0-American Neocons won the over all PR war, making their sociopathic puppet look the part of the victim. However, past rhetoric, the desired reaction did not happen. Germany, France and Italy did not move to the side of the Anglo-American military industrial complex. Instead they negotiated a settlement, the last thing the Neocons planned on or wanted. Furthermore, rifts appeared in various other NATO countries, even Estonia, where groups of MPs decided enough was enough and they were not going to suffer for the Georgian stupidity by loosing business with Russia. Even Brussels said "No" and all flatly said no MAPs (Membership Action Plans) for Ukraine and Georgia.

These were all severe blows to the Anglo-American Trotskyites, no less severe as not coming themselves to the defense of their puppet. This was equally a powerful message. The failure in Afghanistan only adding insult to injury.

Still, all this in itself, may not be enough to finally finish off NATO and end the 100 years of Ideological Warfare, for yes, dear reader, we have yet to leave that period. Russia is no longer the Soviet Union, no longer the Stalinist Marxists, but Economic Trotskyite Marxism (fascism) is alive and well, having infected the West flowing from the decayed corpse of Military Trotskyite Marxism (Nazism). NATO is the final guard against the return of the traditional world, where nations sought economic advantage for themselves not in the name of some mutant form of Internationalism. It is the final guard against nationalistic states that sought the betterment of their people first and foremost and not that of some hypothetical global village or for the internationalistic elite.

The Bank Panic of 2008 may be, however the final stone to knock down this aged and staggering Goliath. The Anglo-American Trotskyites who created this mess are in short, bankrupt. Their ability to project power grows weaker every day with a new DOW low. At the same time, nations such as Iceland, once one of their key military posts, are seeking aid not from their so called allies but from Russia itself. Bound together by economic or cultural or religious or historical ties, or all of the above, nations such as Iceland, Germany, Romania, Bulgaria, Greece, Czech, Slovakia and others will naturally pull away from the now bankrupt alliance. Historical ties that were supposed to have died along with history, as proclaimed by one of the fathers of Trotskyite Neoconism: Fukuyama, will now return the globe to an equilibrium long not seen and one that promises more stability than the Internationalist regimes of the past 100 years.