US presidential hopefuls Barack Obama and John McCain have spent a record amount on their advertising campaigns. The two runoffs have spent about $94 million in dozens of states, financial reports say. According to experts’ calculations, each of the two candidates spend about $3 million a day. 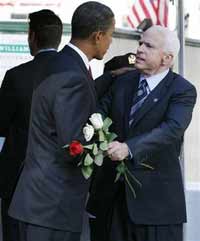 It is worthy of note that the advertising campaigns of the two candidates has been getting more and more aggressive recently. Barack Obama portrayed his rival, John McCain, as a retarded old man, who does not even know how to use a computer. The pre-election website of the senator also offers Believers for Barack and Catholics for Obama buttons and bumper stickers. In the nearest future, Obama’s headquarters plan to release a new portion of advertising material addressing representatives of other religions.

Obama’s online advertising campaign has proved to be a lot more successful than that of his Republican rival. Obama has left McCain behind on his website traffic, banner impressions and even search entries. However, the difference in the ratings of the two senators is very small – only two or three percent.

Two US-based mathematicians said that they had developed a technique which allowed to envisage the results of the election. Calculations showed that Barack Obama would outstrip John McCain.

Wes Colley of the University of Alabama said that McCain would need to win several hesitating states over to his side, whereas Obama can afford losing in a couple of states, although Obama will win the election anyway.

Scientists from the Institute for Operational Research and Management stick to a different opinion. Their calculations show that Republican John McCain will become the next President of the United States. They based their research on the technique of the mathematical model of voting in separate states that uses a dynamic and progressive algorithm to predict the election results.

The early voting in the USA has already begun. The population of Virginia and several other states will be able to cast their ballots 45 days before the election. Thirty-six states in total will participate in the early voting. Not less than 30 percent of US citizens are expected to take part in the voting by absentee ballots.