Presidential runoff John McCain has always been one of the most ardent supporters of tough measures against Russia. In 2005 McCain offered to exclude Russia from the Group of Eight just because of the fact that the Russian government was not sharing USA’s basic values. 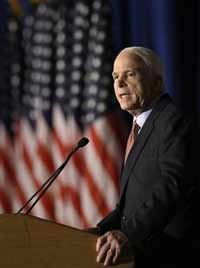 Nowadays, about six months before the presidential election in the United States, John McCain still sticks to his colors. The Republican leader said in an interview with ABC that Vladimir Putin was still ruling his autocratic Russia.

"We need to improve their behavior," McCain told ABC television when asked about his threat to exclude Russia from the Group of Eight if he wins the White House in November.

"His government - former president Putin, and now Prime Minister Putin - has taken his country down a path that I think is very harmful. They've become an autocracy. In the last week or so, look at Russia's actions. They cut back on their oil supplies to the Czechs, because the Czechs made an agreement with us. They have now thrown out - or forced out - BP out of Russia. They continue to put enormous pressures on Georgia in many ways. They're putting pressure on Ukraine. They are blocking action in the United Nations Security Council on Iran," McCain said.

"We want better Russian behavior internationally, and we have every right to expect it. And I will do what I can to see that they reverse many of the behavior patterns which have really been very unhelpful to peace in the world, he said.

All this makes John McCain promote his idea of taking Russia off the list of G8 countries. If elected President, McCain will most likely deal with this question directly, no matter what other members of the elite club are going to say.

A gone case for Mr. McCain.