Official spokespeople for Barack Obama’s headquarters made a statement regarding the publication of a caricature in New Yorker magazine, where the Democratic Senator was portrayed wearing a Muslim outfit next to his wife, depicted as a terrorist. 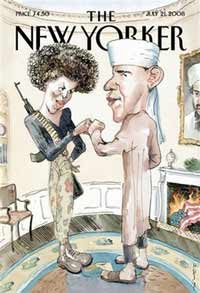 Obama’s headquarters found the drawing “tasteless and offensive.” The illustration titled “The Politics of Fear” drawn by Barry Blitt appeared on the cover of the magazine that hit newsstands Monday, The Associated Press reports.

The Democratic presidential candidate is depicted on the caricature wearing sandals, a robe and turban. His wife, Michelle, was portrayed wearing camouflage pants and a black shirt. Michelle also has a Kalashnikov assault rifle slung over her shoulder. The two characters greet each other exchanging a fist bump, whereas a US flag is burning in a fireplace of the Oval Office. A portrait of Osama bin Laden is seen hanging above the fireplace.

"The New Yorker may think, as one of their staff explained to us, that their cover is a satirical lampoon of the caricature Senator Obama's right-wing critics have tried to create. But most readers will see it as tasteless and offensive. And we agree ,” Obama’s spokesman Bill Burton said.

The magazine said Monday that the caricature combines "fantastical images about the Obamas and shows them for the obvious distortions they are."

"The burning flag, the nationalist-radical and Islamic outfits, the fist-bump, the portrait on the wall? All of them echo one attack or another," spokespeople for the magazine said.

The magazine said satire is part of what it does "to hold up a mirror to prejudice, the hateful, and the absurd. And that's the spirit of this cover."

New Yorker editor David Remnick told the Huffington Post Web site that the cover was chosen because it had something to say.

"I can't speak for anyone else's interpretations, all I can say is that it combines a number of images that have been propagated, not by everyone on the right but by some, about Obama's supposed 'lack of patriotism' or his being 'soft on terrorism' or the idiotic notion that somehow Michelle Obama is the second coming of the Weathermen or most violent Black Panthers. That somehow all this is going to come to the Oval Office," Remnick said.

Asked about the cover on Sunday, Obama said "I have no response to that."

Obama's opponent, Republican John McCain, concurred that the cover was out of bounds, calling it "totally inappropriate, and frankly I understand if Senator Obama and his supporters would find it offensive."

New York Mayor Michael Bloomberg, an independent who has supported Obama's fight to debunk the rumors, said even humorists need to be careful.