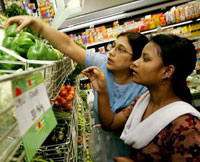 President Bush and other authorities have recently commented that India's middle class is helping to drive up world prices. Because of India's economic boom, the middle class in India has grown to about 350 million people, many of whom are defying traditional norms and demanding beef at the table. This is exhausting grain supplies which are diverted to feeding cattle to raise for beef and leaving less food grains for human consumption and driving the over-all world grain and food prices up.

As an Indian American, I am amazed at some of the persistent misconceptions and derogatory attitudes of some of my fellow Americans concerning India. Of course, no country is perfect and that definitely includes India.

India opened up to Western style capitalism in the late '90s and since then India's economy and middle class has been growing rapidly. India's middle class alone is larger than the entire U.S. population and it's growing bigger by the day. It's a good thing that India didn't open up its economy in the 70's, otherwise gas and food prices would have really shot up through the roof. India's and China's oil consumption for their growing economies is the main reason for today's high oil prices.

The perennial question, of course, is why Indians don't eat all the cows on the street. A beef based diet is much more expensive. Besides, it takes ten pounds of grain protein to feed a cow to get back one pound of beef protein. That's a waste of nine pounds of grain protein! A balanced vegetarian diet can provide all the protein such as a combination of rice and beans (lentils) and wheat bread and beans which many Indians subsist on. The cows in India are used by farmers for tilling the soil, for milk and dairy products, and even cow dung is used for fertilizer and cooking fuel by many villagers.

As a Christian, I am advising a vegetarian diet for those in India not for religious reasons but so that more food would be available, especially for the poorer masses, and at a more affordable price. Also, a balanced vegetarian diet has been proven to be more healthy. What Indians do need to do is remove all the cows not being used which are roaming the countryside eating up precious grain and food that can be used for human consumption.

Most Americans don't realize that Western mathematics originated in India. The so-called "Arabic" numerals were borrowed by the Arabs from the Indians. Because the Europeans borrowed their mathematics from the Arabs they became known as Arabic numerals, but they originated in India. Without the decimal system that India created and which was borrowed by the West, via the Arabs, Western science and technology would not have been possible. The ancient Roman numerals would not have sufficed.

The author, Babu G. Ranganathan, has a B.A. degree with concentrations in theology and biology and has been recognized for his writings on religion and science in the 24th edition of Marquis Who's Who In The East. The authors's website may be accessed at www.religionscience.com .