The world order based on USA’s global supremacy has ended

The full text of the report about national security threats has been published in the USA for the first time ever. Russia was listed as one of the threats in the document. The search for the enemy is based on the pre-election campaign in the States. If the USA is in fear of Russia then it means that the United States finally started to respect its erstwhile Cold War rival. 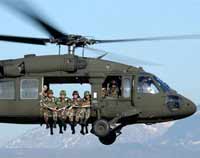 The world order based on USA’s global supremacy has ended

The report enumerates all serious problems, which the USA currently has to deal with. International terrorism is named one of the biggest issues, as always. It goes about the activities of al-Qaeda and Hezbollah, the proliferation of WMDs in Iran and North Korea. The report also highlights complicated situations in Iraq, Afghanistan and Pakistan.

The report virtually describes the usual. It also brings up the question of the need of those organizations if any newspaper can give a very good description of regional problems. There are certain novelties, though: China attempts to strengthen its anti-ally potential, whereas fuel and food prices continue to grow worldwide. The report surprisingly concludes that Russia becomes more and more dangerous for the developed countries.

US special services are concerned about an opportunity for Russia and several other countries to use the financial and market potential to achieve its political goals. Additionally, the US administration is certain that Russia is capable of showing influence on the situation in the world and waging a cyber-war against the US infrastructure.

When the Cold War ended, the USA came across serious difficulties during the creation of the new military and political doctrine. As George Soros once said, the USA was left without an enemy when the USSR broke up, although this enemy used to help the United States personify both the leader of the free world and a superpower.

The US defense complex found itself in a critical state three years after the end of the Cold War. A special report, which defense and trade secretaries delivered to the president on November 12, 1994, said that defense enterprises were suffering considerable losses. USA’s defense sales volume made up $33.2 billion in 1993 and then dropped to $12.4 billion in 1994. The production of M1A2 tanks, F-15 jet fighters, Apache and Black Hawk helicopters was endangered.

On November 14, 1994, President Clinton signed Executive Order 12938, which virtually declared a state of emergency due to a highly serious threat to the US national security, foreign politics and economy. The document gave a green light to the launch of the missile defense program.

Afterwards, the USA started to experience serious problems with its foreign policy in Europe. France put forward an initiative to establish the European collective security system with the participation of Russia, Ukraine and Belarus. Then-president Francois Mitterand stood up against the eastwards expansion of NATO, because it could result in the creation of another iron curtain in Europe.

The coalition between Russia and France was not desirable for the USA. Its further political fiasco in Bosnia and Herzegovina became another complicating factor, which subsequently aggravated relations between Europe and the States inside NATO.

US intelligence services believe that Russia’s biggest problem is connected with the demographic crisis, which affects many sectors of the nation’s economy and armed forces.

The report concludes that the Russian authorities have been conducting successful policy to strengthen the country’s international position. The world order based on USA’s global supremacy has ended.