Russia attracts most attention at Group of Eight summit in Japan

Russia as a key supplier of energy carriers has become the center of attention at one of the most important events of world politics – the Group of Eight summit, which takes place on Japan’s Hokkaido on July 7-9. 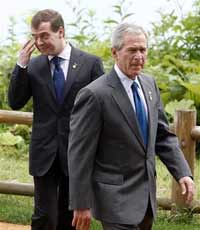 Russia attracts most attention at Group of Eight summit in Japan

The leaders of eight developed countries of the world gathered in Japan to discuss questions related to current global challenges, which include the food crisis, the energy security and the global warming.

Foreign experts do not indulge in illusions as far as Dmitry Medvedev’s participation in the summit is concerned. Hiroshi Kimura, a prominent expert on Russia, a professor at Hokkaido University, believes that the rhetoric of the new Russian president should not be dusting people’s eyes.

It is an open secret that Russia still has complicated relations with a half of G8 members. Many of them raised the subject of developing Arctic resources, which became the reason of yet another international scandal. Everyone, especially Canada, was displeased with Russia’s claims on the Arctic region. Furthermore, all the countries are displeased with one another as competitors for enormous crude and gas reserves on the bottom of the Arctic Ocean.

The British authorities thought that it would be best to declare Russia a threat on the threshold of the summit. Britain was obviously saddened with the increase of the price on gas to $1,000 per a thousand cubic meters.

Japan is very interested in building a dialogue with the new Russian president too. Tokyo is still willing to exercise its wish to own the Russian territory in the form of four Kurile Islands. However, Japanese experts say that Medvedev will not be impressed with massive actions of protest and gigantic maps which display those islands as a part of Japan. Other G8 countries will most likely disregard Japan’s selfish needs too.

Foreign experts say that Dmitry Medvedev will be acting like Putin, not like Gorbachev during his visit to Japan. In other words, one should not expect any significant concessions from Russia. Experts say that one has to wait for a year or two when Medvedev reveals his true colors and when time comes to run about Russia.

Some Russian analysts suspect Putin's choice of the 42-year-old former lawyer and law teacher as a successor, rather than a more hawkish figure, was aimed at easing tension with the West without giving ground on major issues.

Putin, barred from seeking a third straight term, ensured Medvedev's election in March by singling him out as his favored successor. The former Russian leader then moved to the prime minister's post and now heads the country's dominant political party, raising questions about who holds the reins.