A delegation of the North Atlantic Alliance with its chairman Jaap de Hoop Scheffer at the head arrived in Ukraine on June 16 with an official visit. Ukrainian President Viktor Yushchenko invited the delegation within the scope of NATO’s decision to launch negotiations with Ukraine with a view to activate a political dialogue between the former Soviet state and the alliance. In the meantime, the visit raises serious concerns with the Russian administration. Russian officials said that Ukraine’s possible incorporation into the North Atlantic Alliance may result in the introduction of the visa entry between the two countries. 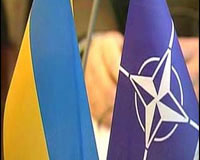 Ukrainian and NATO officials are said to discuss Ukraine ’s execution of the Membership Action Plan for 2008. The Ukrainian administration will report on the course of reforms in the nation, changes in the national army, etc.

Jaap de Hoop Scheffer said on the threshold of his visit to Ukraine that NATO had no intention of deploying its bases in Ukraine, not even in the city of Sevastopol (which is the current naval base of Russia) after the Russian Black Sea Navy leaves the base by 2017. He also stressed out that NATO would stay beyond all bilateral discussions between Ukraine and Russia regarding the future of the Black Sea Navy.

Ukraine and NATO signed the memorandum of understanding on June 13 in Brussels of Ukraine’s joining the NATO system of air space control. Ukrainian Defense Minister Yuri Yekhanurov said that Ukraine was looking for its space in NATO where it could be useful for the alliance. The minister reminded that Ukraine participates in all operations of the alliance, including those in Afghanistan and Kosovo.

However, President Yushchenko was critical in his remarks about the combat readiness of the Ukrainian army. The president said that up to 85 percent of Ukraine’s missile complexes, 55 percent of fighter jets, 84 percent of battle ships and 61 percent of automotive equipment had exhausted their resources.

It is worthy of note that it is not only Russia that stands firmly against Ukraine’s participation in NATO’s Membership Action Plan. Many countries of Western Europe, including Germany, France and Spain, set out their concerns about Ukraine’s initiative.

Moscow and Kiev exchanged harsh statements shortly before NATO’s visit to Ukraine. Russia’s Vice Prime Minister Sergei Ivanov said: “I am certain and almost certain that in case of Ukraine’s possible incorporation in NATO we will have to effect the visa entry with the country. NATO will make Ukraine put visa requirements in effect. This will touch upon millions and even tens of million of people in both Russia and Ukraine, whose communication will be complicated,” Ivanov said.

Visas between Russia and Ukraine will seriously affect the number of Russian tourists traveling to Ukraine ’s Crimea for summer holidays. “At the same time I seriously doubt that American, British and German tourists will rush to Crimean beaches instead,” Sergei Ivanov said.

The official added that Russia and Ukraine may face serious problems in their military and commercial relations. Mr. Ivanov concluded that Russia would take immediate measures in response in the even Ukraine becomes a NATO member.

Spokespeople for the Ukrainian administration said that Sergei Ivanov’s statements were at least unprofessional. “To connect NATO with tourism and visa requirements is at least unprofessional. These things have nothing to do with each other. NATO has nothing to do with visa issues,” the head of the press service of the Ukrainian Ministry for Foreign Affairs, Vasily Kirilich said.