Washington is bustling: former press secretary of the White House Scott McClellan proved to be a member of the opposition. In his published memoirs he heavily criticized President Bush, some members of his team and the political course of his administration. McClellan who was thought to be a loyal member of the Bush’s team is now criticized by Bush’s comrades-in-arms, and the general public is wondering whether denunciation of somebody else will follow. Now for royalties or for any other reason Vice President Richard B. Cheney or Secretary of State Condoleezza Rice may write their own books about their resistance to the Iraq war. 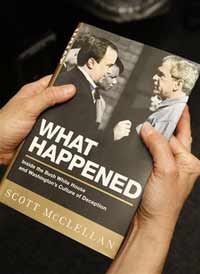 The story is really unusual. McClellan, a Texan, was brought up in the family of political elite. In 1999 he aimed his efforts and experience at organizing successful political campaigns in favour of George Bush. He was employed by Karen Hughes who was then responsible for Bush’s public relations, and then ended her career in the Department of State when she understood that she could not create a cheerful image of the USA in the world.

McClellan turned out to be more successful in his career. From 2003 to 2006 he worked as the press secretary of the US administration. He enthusiastically stood up for the White House in most complicated issues like the Iraq war or Hurricane Katrina. Readers of his memoirs cannot help but marvel how the press secretary could work so valiantly and then realize that Bush’s course is erroneous.

There are several major accusations in the memoirs: disillusionment of the general public aimed to justify the war in Iraq, treachery in eliminating opponents, which can be proved by the story of declassification of Valerie Plame and the general tendency to shamelessly manipulate the pubic opinion. The last accusation sounds odd from such a high-level professional who did that job throughout his life. Anyway, better late than never.

Former comrades-in-arms are at a loss. First comments were full of suspicion: it was particularly said that Scott McClellan had been tricked into it by liberal New York publishers who promised him enormous royalties and put the words in his mouth that he would never say. The version proved to be impossible very quickly. McClellan’s former colleagues continue to point at his unscrupulousness saying that he is very much obliged to George Bush.

Maybe, it is true. However, this fact could hardly stop McClellan from writing. Firstly, Bush himself did his best to enter the US history as one of the worst presidents ever. Nowadays the criticism of Bush and his policies is not shameful, but even meritorious. Secondly, if this criticism is lucrative, it is twice as meritorious. McClellan’s book will definitely sell well. There is yet another explanation why the press secretary did it.

There is democracy in the USA. Bush’s sympathies helped McClellan ascend to the political top indeed. However, if he remained a sensible and intelligent person, he could not help but notice the catastrophic consequences of the US-led political course. McClellan told CBS that when he gave up working in the administration, he obtained an opportunity to look at the situation calmly and he was convinced that Bush’s actions ran counter to the values of serving the society.

McClellan was not the first former worker to expose Bush. For instance, Treasure Secretary Paul O'Neill criticized the economic policy of the Bush’s administration, counter-terrorism coordinator Richard Clarke – counterterrorism campaign. However, McClellan remains Bush’s closest critic so far. At first sight it seems that his accusations could start a real revolution in Washington, but experts doubt it – everything bad about the current administration was known long ago without McClellan.