The US most popular TV channel Fox News has been beaten by CNN for the first time during the last seven years. Preferences of US citizens were affected by the media reporting of the election campaign and the country’s foreign policy. Twelve million TV viewers preferred the ‘objective’ CNN to Fox News that justifies George Bush’s policy. 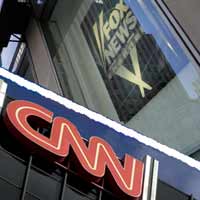 In April 2008 the CNN audience counted 62 million people, while Fox News had only 50 million TV viewers, Handelsblatt reports. According to US media experts, the reason for this change is the information policy run by the competing TV channels. “CNN has beaten all the TV channels by the quality of its programs concerning the elections,” said Joe Cuthbert, a professor of the Department of Journalism of the Columbia University in the City of New York.

Fox News, a part of Rupert Murdoch’s News Corporation, engaged in one-sided advocacy of the stance of the current US administration, instead of providing all-round objective reports of election campaigns. Economists proved that George Bush would have never won the 2000 election but for the support from Fox News. The TV channel definitely backs up right-wing Republicans, Cuthbert considers. “Fox is rather the advocate of Bush’s government than a news TV channel. Now the political ship is sinking, and so is Fox.”

Jonathan Mann who has been working for CNN for 20 years remembers that “CNN used to be a tiny company with a small budget and minimum possibilities.” Now the moderator is 47 years old, but he started as a European correspondent in Paris, and did reports on the fall of the Berlin Wall and the collapse of communism in Eastern Europe. “At that time we first tried to work in a new way – to broadcast news day and night.”

Naturally, some companies followed that example and later turned into our serious rivals: Fox News and MSNBC in the USA, as well as BBC World, Sky News, N-TV, N24 and other channels in Europe. Today in India alone there are over 25 news channels. “CNN sells a certain product – this product is called information,” Jonathan Mann said.

In late 1990s CNN reduced the amount of political news and started doing more talk shows. As a result, from 2000 to 2003 the corporation lost a part of its audience and profits. The parent company Time Warner thought about the merger of CNN and TV giant ABC or a possible sale of CNN. The New York Times wrote several articles at that time about “the identity crisis” at CNN. “Rivals’ attempts to imitate each other testify to unhealthy situation,” said professor Cuthbert. “Healthy competition means that rivals oppose and differ from each other.”

Finally, the CNN management came back to the things the channel has always been good at. “It is news combined with innovations and the latest technologies,” said David Boreman, the head of the CNN politics department. Success came fast. Although Time Warner does not publicize CNN financial indexes, profits of the legendary channel increased by 20 percent since 2004, The New York Times said.