Mikhail Gorbachev, the ex-president of the USSR, has accused the USA of the imperialistic conspiracy against Russia, which pushes the world to a new Cold War. He said that Washington has been increasing its military potential to prevent Russia’s revival. “The USA can’t put up with the fact that somebody in the world is independent on it,” Gorbachev told The Daily Telegraph. “Every American president must wage war,” he added. 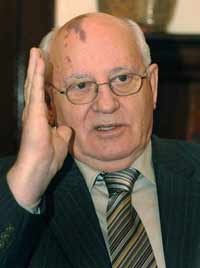 The former Soviet leader voiced confidence that Russia has no enemies and Putin is not going to wage war against the USA or any other country. He also believes that Putin as the prime minister will engage more in issues of international politics and will let Dmitry Medvedev concentrate on internal problems.

“Nonetheless, we see that the USA is passing the defense budget and increasing costs of strengthening the conventional armed forces at the insistence of the Pentagon’s head because of the possible war with China or Russia. Sometimes I think that the USA intends to wage war against the entire world,” Gorbachev said.

He also reminded of the USA’s plans to deploy elements of its missile system in Eastern Europe, which he described as ‘a very hazardous step’, because it will ‘raise the arms race to a much higher level’.

He said that NATO’s promises to admit Georgia and Ukraine into the alliance were just an attempt to increase the US influence on Russia’s home affairs. “After the Cold War the USA promised that NATO would not go beyond Germany, but for the time being a half of countries of Central and Eastern Europe has joined the alliance. So much for their promises. That proves that we can not trust them,” the former Soviet leader said.

It is not the first time when Gorbachev criticizes the incumbent US administration. Last December during his Harvard address Mr. Gorbachev said: “During the 1990s we witnessed regression from trust to mutual misunderstanding and suspicion.” The 1972 ABM Treaty was ignored by Bush, he said. “We are seeing remilitarization of reasoning in nuclear politics,” Gorbachev considered. “Now all nuclear powers base their politics on the long-term preservation of nuclear weapons, which is dangerous,” he said. “I reckon that it is conceit of the great power that is sure it can solve any problems by itself, which can prove costly,” he said. “We are paying the price now, and I think so is the USA.”