After the Israeli aviation attacked Syria in September of 2007 and destroyed a certain object code-named Al Kibar, which bore resemblance to an incomplete nuclear reactor, the West started to suspect Syria of running secret cooperation with North Korea in the nuclear field. Several US-based newspapers reported on April 24 with reference to their own sources that the suspicion had not been on rumors only. 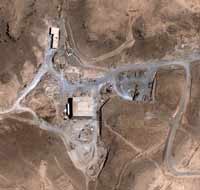 An anonymous spokesman for the US authorities reportedly said that Washington had collected enough evidence to prove that North Korea was providing assistance to Syria during the construction of the above-mentioned object which could be capable of producing plutonium for the subsequent creation of nuclear weapons.

The Washington Post wrote that the US administration had obtained a video tape from Israeli special forces. The tape reportedly shows North Korean citizens working on the Syrian object, which bears a striking resemblance to the North Korean reactor in Yongbyon.

Until recently, the US authorities refused to confirm the information about the target, which the Israeli Air Force had destroyed in Syria. CIA agents will reportedly present evidence to the Congress to prove that it goes about a reactor.

A high-ranking source told CNN that the Congress will hold special briefings to show that the building, struck by Israel, was a nuclear reactor designed by North Korean specialists and built with their help.

White house Press Secretary Dana Perino confirmed the information. She said that the White House would soon disclose the information about the nuclear cooperation between North Korea and Syria.

The Syrian regime must come clean before the world," she said. "The construction of this reactor was a dangerous and potentially destabilizing development for the region and the world. We have good reason to believe that reactor, which was damaged beyond repair on September 6 of last year, was not intended for peaceful purposes,” she said.