Russian businessman Viktor Bout, who was arrested last week in Thailand by US special services as an alleged arms dealer, was convoyed to a high security level prison in Bangkok. It happened after the court declined his lawyer’s petition for release on bail. Besides, the court answered investigators’ claim to prolong Bout’s period under guard up to March, 20, when US special services are expected to send to Thailand all the documents necessary for his extradition to the USA. 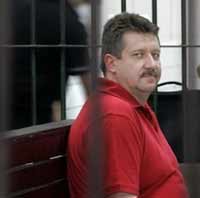 Next day after Bout’s arrest US special services reported how and why they had arrested him. The topic was highlighted at a special briefing at the prosecutor’s office in the South district of New York.

According to a spokesman of the office, Mr. Bout’s arrest was part of a DEA (Drug Enforcement Administration) special operation that had been prepared for almost two years. The report says that Viktor Bout and his acquaintance Andrew Smulian are charged with criminal conspiracy to sell the Igla Man-Portable air defence systems (MANPAD) and other weapons to the FARC Colombian terrorist group (Revolutionary Armed Forces of Colombia) that has been waging guerilla warfare against the country’s government for years. The prosecutor’s report notified that the FARC was engaging in drug sales, kidnapping and murder of American citizens and was attempting to overthrow the Colombian government.

DEA agents came to know that MANPADs could be also used to destroy the military helicopters that the USA had supplied to Colombia, the prosecutor’s office informed. Then the decision was taken to work out a plan to counteract the supply chain of weapons. According to prosecutor’s office, in 2007 the DEA asked its informer (who was familiar with Bout, was his business partner and even an advisor with one of Bout’s air companies) to contact Smulian. The meeting occurred in November of 2007 on Curacao (an island in the Caribbean Sea). Apart from the informer and Smulian, there were two DAE officers who pretended to be FARC spokesmen and set out their intentions to buy Igla MANPADs. Then Smulian went to Russia several times to negotiate the deal with Bout, US special services said.

Then Smulian told DEA agents that Bout also offered money-laundering services to the FARC for 40 percent commission. He also promised Colombian militants another kind of help saying that “any communists are our friends”.

In late January of 2008 Smulian met “FARC spokesmen in Copenhagen and discussed the potential place for meeting Bout,” the prosecutor’s report said. In a private conversation with a DEA agent, Smulian said that it related to the man nicknamed ‘Merchant of Death’ and that “the whole world was hunting for him.” In addition, when he was in Russia, Bout showed him a picture of FARC senior leaders and asked him to show those who had got into touch with him, Smulian said.

On January, 26 Smulian and DEA agents arrived in Bucharest, US officers report. Police investigators argued that they wanted to meet Bout in person to clinch the deal and pay the money. Smulian contacted Bout with an agent on the phone and they discussed possible places to meet, including Cuba, Nicaragua and Armenia. Afterwards, Smulian took the call and (having previously talked to Bout) told the buyers that he had 100 Igla MANPADs and also “helicopters in Bulgaria that can make mincemeat of their helicopters.” At the meeting with Colombian militants Bout was arrested, the prosecutor’s office reported.

US authorities and even the UN referred to Viktor Bout as one of world’s leading arms dealers and even imposed sanctions on him and his companies. In his scarce interviews Mr. Bout would call these claims stupid and delirious. After his arrest in Bangkok he adhered to the same position. According to Bout’s version that was voiced by his lawyer, he just took a holiday in Bangkok and had no idea about any weapons.

Businessman’ lawyer, Lak Nitiwatavichan, recommended by the Russian Embassy, said that he would endeavour to release his client from custody. He claimed that he would try again after he receives necessary documents from Moscow. Mr. Bout seems calm and denies all charges, the lawyer said.

Bout’s Russian lawyer, Viktor Bourobin, argued that he would try to get Bout’s extradition to Russia, though he did not deny the fact that Bout might be extradited to the USA. “The decision to extradite Bout to the USA is procedurally possible, for the Thai court is not going to investigate the process in its essence,” said Mr. Bourobin.