Policies of Socrates government receive “Fail” grade by largest demonstration of teachers ever in Portugal. The vast majority of the country’s teachers – 100.000 of them – turned out in Lisbon on 8th March to protest against the new policies for assessment and management of state schools. 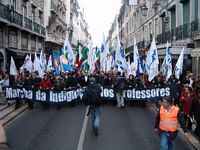 The press had predicted 40.000, then 50.000. Then sixty. Seventy...In the end, one hundred thousand teachers turned out to complain about, in the words of the State School Movement, the fact that “no other government has gone so far in amputating teachers’ rights and degrading their working conditions”.

Behind the reason for today’s massive demonstration are the policies of the “socialist” (only in name) Government of Prime Minister Jose Socrates in general and his Education Minister (Maria de Lourdes Rodrigues) in particular, implemented with the sheer, blind arrogance which characterises this regime that has torn Portuguese society apart and relegated countless thousands to levels of poverty and hunger unseen in the rest of the European Union. In this case, sweeping reforms were introduced without bearing in mind the advice of the teaching staff, without listening to the professionals working in the sector.

The last drop are the new guidelines for the assessment of teachers. Badly explained from the outset, the new system contemplates not only the results of pupils in a teacher’s assessment but also the opinion of the pupils themselves and assessment by colleagues. An example of the chaotic way in which the policy was delivered was the demand by the Ministery that assessment grids be drawn up by the schools, without the content having been regulated beforehand.

Moreover, in November 2006, the Teaching Career Stature was revised, creating two categories: teachers and titular teachers, this last one being reserved for one third of teaching staff who are responsible for management, assessment and coordination, without clear criteria having been established for this effect.

Finally, the new management model for state schools is yet another fine example of the anti-democratic modus operandi of this Government, which insults the word “Socialism”, having taken the Socialist Party well to the right of the Social Democrats. In the new model, directive councils are replaced by all-powerful directors, and a General Council, composed by teaching and non-teaching school staff (but at most 50% of the total) and other elements from outside the profession, from municipalities, parent associations and local institutions – making decisions affecting the teachers´working conditions but being outside the profession themselves.

According to the unions, this model is an attack against a democratic management of state schools and is a further affront to the teaching class, diminishing its voice inside the school. The Statute implements a system where for example, a maths teacher can assess the test given by a biology teacher, setting up a peer review mechanism where persons without any conditions whatsoever are to assess their colleagues. And lastly, how many pupils, anywhere in the world, are qualified to judge a teacher’s work? Those who state that their favourite subjects are the break times?