Legendary Israeli politician and former Prime Minister Ariel Sharon turned 80 on February 27. He has been staying in a coma after a massive brain haemorrhage that he suffered in early 2006. Since then the politician has not recovered consciousness. His name rarely appears in the news now. Israel remembers him only on historical holidays although history of this country is nothing without Sharon. 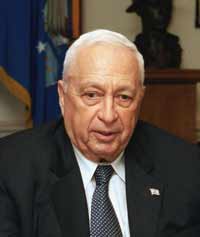 His depart from big politics brought to the end the epoch of leading generals, who started their way to power in trenches during the time of first Prime Minister David Ben-Gurion and finished it in the chair of a government member. Here belong former Prime Minister Yitzhak Rabin who was shot dead by a European fanatic, as well as former Chief of Staff of the Israeli Defence Forces, Rafael Eitan, who drowned in the sea in 2004 and former Chief of Staff of the Israeli Defense Forces, Moshe Dayan, who died from cancer in 1981.

Ariel Sharon took part in all wars of the Israeli history, except for the last one that broke out with Lebanon’s Hezbollah when Sharon had already been in a coma. The general’s political career was neither consistent nor immaculate, but it always held people’s attention. In the late 1970s when he was the Minister of Agriculture, he contributed substantially to creating Jewish settlements on Arabic territories, including the Gaza Strip. In August-September of 2005, he had Gaza settlements wiped off.

The ruling Israeli centrist party called Kadima (lit. Forward), was created by Ariel Sharon in 2005. For this he withdrew from the rightist party called Likud (lit. Consolidation). While Likud existed since 1973, Kadima may not survive after one parliamentary election, experts believe. “Historically Israeli centrist parties do not exist long,” Alon Peled, a Doctor of Political Science with the Hebrew University in Jerusalem , said to the Vremya Novostei newspaper.

Nowadays, the grateful Israelis decided to name the would-be theme park after their prominent politician. The location for the amusement park is currently taken by Israel’s largest dump. The park named after Ariel Sharon is said to be built there in two years.

Sharon still lies comatose at the Sheba Medical Center in Tel Aviv. His sons Gilad and Omri, as well as attending doctors, decline to comment on the state of his health. But it recently transpired that Ariel Sharon dispenses with a respirator and even can open his eyes.

It is worthy of note that it was in April of 2007 when the administration of another hospital (Adassa Ein-Kerem in Jerusalem where he spent about a year) asked the government to pay medical bills for the treatment of the former head of the government. It turned out that the bill for staying in the neurosurgery department was several hundred thousand shekels more than the medical insurance could cover. Sharon was transferred to another hospital after the scandal.

If Ariel Sharon recovered his consciousness now, he would be upset to hear other news concerning his 43-year old son Omri. In January the Israeli High Court of Justice upheld the verdict of the district court (seven years of imprisonment) and declined any possibility of appeal. Omri Sharon was convicted of breaking the law on the financing of political parties on the eve of the election, of receiving illegal contributions and of giving testimonies.