Gennifer Flowers, the former secret mistress of Bill Clinton for 12 years, continues to defend the American tradition to spy on candidates in their bedrooms, ferreting out their sexual habits. Flowers shared her knowledge of frivolous details in an interview with Italy’s La Repubblica newspaper. 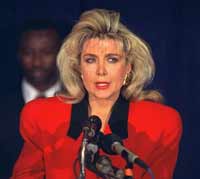 Flowers particularly said that the private life of a human being was like a litmus paper of his or her accuracy and correctness in public life. “If Bill had ever spoken the truth about me, he would have come out of the story as an honest person. However, he lied,” Flowers said.

Flowers believes that such sensational stories about secrets of private life could be allowed during the pre-election campaign. The election time cancels all taboos; a candidate can use any method to win the race. The game is worth the candle, so to speak.

“It is absolutely natural that extramarital relationships are perceived differently in the USA than in Europe. They are excluded in the States. That is why Democrats used the rumors about McCain to attack him and put obstacles on his way to the White House,” she said. American newspapers report that John McCain had a liaison with lobbyist Vicki Iseman, who is 30 years his junior.

However, Bill Clinton managed to come to power in the USA despite his long-standing affairs with Flowers. “That was a totally different story. No one knew Bill back then. The scandal helped him advertise himself and appear on television rejecting the truth. McCain is a well-known figure in the United States,” Flowers said.

Gennifer Flowers also commented on Hillary Clinton’s behavior during her husband’s adultery. “Hillary was perfectly aware of our relationship. She was defending her own structure of power. That gesture was not a display of love towards her husband, although it did exercise her impetuous personal ambition,” she said.

Answering the question of whether she was going to vote for her former lovers’ wife, Flowers said that she greatly sympathized with Rep. Barack Obama.

Flowers said that the Clintons always thought of themselves as invincible politicians, betting on other people’s dullness. “They managed to be elected twice in the White House and twice in the Senate. However, people started to understand now,” Flowers said.

Gennifer Flowers came forward during Clinton's 1992 Presidential election campaign admitting that she had had a twelve-year relationship with him. When Clinton denied having relationship with Flowers, she held a press conference in which she played tape recordings she claimed were of secretly recorded intimate phone calls with Clinton. Hillary Clinton, for the first time, made the media rounds to rebut sexual allegations against her husband. When asked why Clinton and Flowers called each other "honey" in the tapes, Mrs. Clinton explained that this was how people talked in Arkansas. At least two Arkansas state police officers who had formerly guarded Bill Clinton when he was Governor backed up Flowers' story. Clinton also apologized to Mario Cuomo for remarks he made about him on the tapes.

In his autobiography My Life, Clinton acknowledged testifying under oath that he had sexual relations with Flowers on one occasion only. When Flowers learned of it, she went public again to tell her side.

She published her memoir Gennifer Flowers: Passion and Betrayal in 1995. In it she confessed a sexual naivete at the time of her relationship with Clinton ("The first time he [climaxed during oral sex], I was taken aback. I was saving that for my husband, if ever. But Bill was gentle and held me after."). She posed nude for Penthouse magazine during this period and was featured in the December 1992 issue along with her story "Gennifer Flowers Tells All, Shows All."

Flowers sued Hillary Rodham Clinton, George Stephanopoulos, James Carville, and others for defamation, claiming that they orchestrated a campaign to discredit her. Judicial Watch represented her in her defamation lawsuit against Hillary's former aides, Stephanopoulos and Carville. The alleged defamation occurred in 1992. Newspapers reported that she and Gov. Bill Clinton had an affair. Bill Clinton denied the affair at that time. Flowers held a news conference and played audio tapes of phone calls between them. On CNN and ABC Carville and Stephanopoulos said Flowers had changed the tapes' information. Stephanopoulos also repeated that claim in his book. She claims they conspired with Hillary to defame her. Larry Klayman, Flowers' attorney, was seeking damages in court (Flowers v. Carville). "We allege Hillary Clinton was the mastermind of them uttering the words that the tapes were doctored," Klayman said. "They destroyed her." A number of judgments have been made and some appeals have been upheld. In January, 2006, the Ninth Circuit rejected the latest appeal. Future appeals are under consideration.