The world starts to react to the trick of Albanian separatists in Kosovo. The UN Security Council gathered for a special meeting upon Russia’s demand to discuss the declaration of Kosovo’s independence that the Parliament of Kosovo approved on February 17. 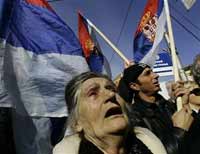 Russia’s representative at the UN, Vitaly Churkin, said that the single-handed declaration of Kosovo’s independence had no legal force. However, several other members of the UN Security Council upheld the initiative. The USA particularly supported the new state. U.S. President Bush stated during his African tour that Kosovo had become an independent nation. Bush reminded that the US administration was had been trying to achieve the same goal.

US Secretary of State Condoleezza Rice congratulated the Kosovars on their new status. However, Serbia’s Prime Minister Vojislav Kostunica said that Belgrade was going to recall its ambassador in the USA.

Great Britain, France, Belgium and Italy also announced their readiness to recognize Kosovo’s independence. Afghanistan became the first in the line: “We support the decision of the nation and recognize the independence of Kosovo,” the press service of the Afghan Foreign Ministry said.

Moscow does not share the ecstasy at all. Russia’s Foreign Affairs Ministry stated that the UN Mission in Kosovo and the peacemaking forces in the region should take immediate actions to realize their mandates, cancel the decision of Pristina’s self-governing authorities and take tough administrative measures against the latter.

Serbia’s President Boris Tadic, who participated in the meeting of the UN Security Council, fully supported Russia’s stance on the matter. In a letter to the UN Secretary General Tadic urged all members of the United Nations Organization to respect the sovereignty and territorial integrity of Serbia in accordance with their international obligations. Tadic described the declaration of Kosovo on February 17 as a violent, single-handed separation of a part of the Republic of Serbia.

Serbians living in Kosovo’s north also refused to recognize Pristina’s declaration of independence. Specialists predict massive riots, pogroms and massacres in the region. “Belgrade would obviously like to avoid any actions, but it won’t be able to sit on its hands because it will lose its power immediately. Therefore, the government of Serbia will have to make certain decisions to defend their country-fellows in Northern Kosovo. NATO will most likely stand up against the Serbs and turn a blind eye on pogroms organized by Albanians,” expert with the Institute of Europe of the Russian Academy of Sciences, Pavel Kandel said in an interview with the Vremya Novostei newspaper.

“Albanians living in the north-west of Macedonia already believe that they are living in an alien country. That is why they will be willing to become a part of the independent Kosovo. All this will seriously exacerbate the situation on the Balkans,” the specialist added.

The European Union differs in its opinions on Kosovo’s problem too. Spain, Greece, Romania, Slovakia and Cyprus protest against the independence of Kosovo. However, several EU members confirm their intention to recognize Kosovo as an independent state. Germany, Ireland, Latvia and Estonia joined Britain, France, Italy and Belgium yesterday in Brussels.

Russia is not alone with its serious concerns about the independence of Kosovo. Official spokespeople for China’s Foreign Ministry condemned the initiative and criticized Taiwan for its congratulations to Pristina. “Everyone knows that Taiwan is a part of China. Taiwan has no rights and status to realize the so-called recognition of Kosovo’s independence,” Chinese officials said.

Indonesia, the largest Muslim country in the world, does not intend to recognize Kosovo’s new status either.

Join Pravda.ru forum to speak your mind on the subject