Too much love and no politics for French President Nicolas Sarkozy

Nicolas Sarkozy, the President of France, finally married former top model and singer Carla Bruni in a closed-door civil ceremony which took place on February 2. It became the third marriage for 53-year-old Sarkozy, who divorced only in October. 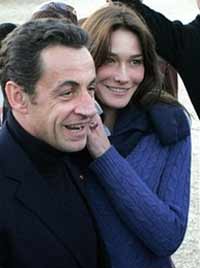 Too much love and no politics for French President Nicolas Sarkozy

Sarkozy’s frivolous way of life leaves many people wonder if he ever settles down to rule France. Many say that they will not be surprised to see Sarkozy entertaining himself throughout his entire presidency.

The ceremony took place at the Elysée Palace on Saturday with about 30 friends and relatives attending.

The loving couple spent the wedding night in a former hunting lodge near the Versailless Palace. The newlyweds were spotted walking hand-in-hand in Versailles’ gardens Sunday.

Sarkozy and Bruni got married less than three months after they reportedly first met. Nicolas Sarkozy has three sons from his previous marriages. However, it is the first marriage for Carla Bruni. The former model also has a son from her previous relationship.

Nicolas Sarkozy was elected president on May 6, 2007. Under Jacques Chirac's presidency, he served as the Minister of the Interior in Jean-Pierre Raffarin (UMP)'s first two governments (from May 2002 to March 2004), then was appointed Minister of Finances in Raffarin's last government (March 2004 May 2005), and again Minister of the Interior in Dominique de Villepin's government (2005-2007). Sarkozy was also president of the General council of the Hauts-de-Seine department from 2004 to 2007 and mayor of Neuilly-sur-Seine, one of the wealthiest communes of France from 1983 to 2002. Furthermore, he was also Minister of the Budget in Édouard Balladur (RPR, predecessor of the UMP)'s government during François Mitterrand's last term.

Sarkozy is known for his strong stance on law and order issues and his desire to revitalise the French economy. In foreign affairs, he has promised closer cooperation with the United States. His nickname "Sarko" is used by both supporters and opponents.

Sakozy wed his first wife Marie-Dominique Culioli on 23 September 1982; her father was a pharmacist from Vico (a village north of Ajaccio, Corsica). They had two sons, Pierre (born in 1985) and Jean (born in 1987). Sarkozy's marriage witness was the prominent right wing politician Charles Pasqua, later to become a political opponent. Sarkozy divorced Culioli in 1996, although they had already been separated for several years.

As mayor of Neuilly-sur-Seine, Sarkozy met former fashion model and public relations executive Cécilia Ciganer-Albéniz (great-granddaughter of composer Isaac Albéniz and of a Russian father), when he officiated at her wedding to television host Jacques Martin. In 1988, she left her husband for Sarkozy, and divorced Martin one year later. Sarkozy married her in October 1996, with witnesses Martin Bouygues and Bernard Arnault[citation needed]. They have one son, Louis, born 23 April 1997.

Between 2002 and 2005, the couple often appeared together on public occasions, with Cécilia Sarkozy acting as the chief aide for her husband. On 25 May 2005, however, the Swiss newspaper Le Matin revealed that she had left Sarkozy for French-Moroccan national Richard Attias, head of Publicis in New York. There were other accusations of a private nature in Le Matin, which lead to Sarkozy suing the paper. Sarkozy and Cécilia ultimately divorced in October 15, 2007.

Sarkozy declared to the Constitutional Council a net worth of 2 million euros, most of the assets being in the form of life insurance policies. As the French President, he earns a yearly salary of 101,000 euros and is entitled to a mayoral pension because he was mayor of Neuilly-sur-Seine until 2002. He also receives a yearly council pension, because he has been previously a member of the council of the Hauts-de-Seine department. Sarkozy's salary will more than double to 240,000 euros as a result of an amendment to the 2008 budget.