Late January turned out to be a sign of disaster for the American space. There is no other explanation for the fatal coincidence of three catastrophes that killed 17 astronauts. On January, 27 and 28 NASA commemorated the people who died for the sake of space exploration. 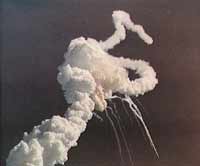 The first tragedy occurred not in space, but on Earth before the flight. The ship was Apollo 1 (January 27 1967). As known, the Apollo program was aimed for the Moon and it succeeded. But a tragedy preceded. That day astronauts Gus Grissom, Edward White and Roger Chaffee conducted pre-launch tests in the Apollo 1 cockpit. An ignition in the command module was signaled at 23:31:04 GMT. The staff and the crew followed the rules and started leaving the ship, the released data said. Later it was found that a pilot left his chair to keep himself off the fire. The mission commander followed the routine and took necessary actions to open the hatch. The pressure in the command module was higher than outside, that is why it was impossible to open the exit door, and the hatch utility system was out of order. When the staff managed to break the ship, the crew members had already died. Doctors had to pronounce death of the crew caused by fumigation and scorches. NASA investigated the catastrophe thoroughly and corrected the defects in the system. But it was a terrible tragedy to lose three people on Earth in an attempt to reach the Moon. However, the Apollo program was not shut down. The 11th space ship in the production run landed on the Moon and showed the world the first steps of man on the lunar surface. The 13th space ship could also become a disaster, but the astronauts were brought back to Earth safe and sound.

Observation platforms were occupied by press representatives, relatives and officials. They had binoculars, photo, TV and video cameras. All of them applauded when the booster rocket and the spaceship took off. As soon as the ship left the ground, TV cameras caught the sight of white smoke coming out from the joint between the lower and the middle sections in the right booster. Then there was black smoke, and a fire jet broke through 59 second into the flight. The catastrophe took place during the 73 second after Challenger’s lift off.

A solid propellant booster on the carrier rocket burst up and the space ship took on fire. If the mission commander had known what was going on, the Challenger crew might have had a chance to rescue themselves. However, the crew noticed the emergency too late. It may seem unbelievable, but four crew members survived after the explosion that tore off the nose-body of the ship. They died as the ship’s debris banged down on the water surface.

The so-called O-ring, a densifier on the solid propellant booster, caused the catastrophe, the intelligence committee concluded. The space filler was refrigerated and destroyed. On early morning of January, 28 the air temperature dropped below zero. NASA knew that the densifier between the sections lost its elasticity at low temperatures and could no longer provide hermeticity between the joints. But they did not postpone the launch, and the tragedy occurred.

But before the complete contact loss some defects were recorded on the earth. They lost contact with the fluid power gauge in the left wing and with the gauges of the wing flap. Three minutes later a number of other gauges went out of order, namely the brake pressure gauge in the chassis tire of the left wing. The temperature gauges in the shuttle hull near the recess of the left chassis wheel showed a drop by 600 F, while in the same area of the right wing it fell only by 150 F. Three temperature gauges were out of order in the part of the ship, and the Columbia computer showed a pressure drop in the chassis, which caused unease in the pilots. They confirmed it in the inquiry of the control centre, and these were their last words. The space ship started falling apart, which Texas inhabitants witnessed. At first Columbia broke into two pieces, then smaller parts split off. The catastrophe occurred at a speed of 2000 kmph, at a height of 63 km. The crew members stood no chance to survive. The ship’s destruction was caused by a piece of isolating foam which tore off during the launch, hit the front brim and led to the split of the thermal isolation layer.

Space flights are very dangerous. Americans is not the only nation to have lost its space explorers. Russian cosmonauts Valerius Komarov (Soyuz 1), George Dobrovolsky (Soyuz 11), Vladislav Volkov (Soyuz 11), Victor Patsaev (Soyuz 11) are also on the list of heroes.