A laptop containing the personal details of 600,000 new and prospective military recruits has been stolen, the Ministry of Defense said Friday, the latest in a series of government blunders over data. 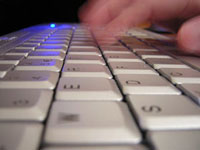 The laptop was stolen from a Royal Navy officer in the central city of Birmingham last week, a statement said.

The amount of information held on each individual varied from just a name to full background details including passport numbers, insurance numbers and family background information.

The ministry said it was urgently writing to around 3,500 people whose bank details were included on the database, the AP reports.

Revealing such a wide array of information could have devastating consequences for anyone trying to defend themselves from identify theft, Reuters reports.

Banks holding personal accounts that could have been affected by the security breach have been "flagged for scrutiny against unauthorised access."

The Royal Navy of the United Kingdom is the oldest of the British armed services (and is therefore known as the Senior Service). From the early 18th century to the middle of the 20th century, it was the largest and most powerful navy in the world, playing a key part in establishing the British Empire as the dominant power of the 19th and early 20th centuries. In World War II, the Royal Navy operated almost 900 ships. During the Cold War, it was transformed into a primarily anti-submarine force, hunting for Soviet submarines, mostly active in the GIUK gap. With the collapse of the Soviet Union, its role for the 21st century has returned to focus on global expeditionary operations.

The Royal Navy is the second-largest navy in the world in terms of the combined displacement of its fleet after the U.S. Navy. There are currently 91 commissioned ships in the Royal Navy, including aircraft carriers, nuclear submarines, mine counter-measures and patrol vessels. There are also the support vessels of the Royal Fleet Auxiliary. The Royal Navy's ability to project power globally is considered second only to the United States Navy. The Royal Navy also has the second largest carrier fleet in the world, with 2 carriers in service and 2 planned.

he Royal Navy currently operates three bases in the United Kingdom where commissioned ships are based; Portsmouth, Clyde and Devonport. Each base hosts a Flotilla Command under a Commodore, or in the case of Faslane a Captain, responsible for the provision of Operational Capability using the ships and submarines within the flotilla. 3 Commando Brigade Royal Marines is similarly commanded by a Brigadier and based in Plymouth.

Historically the Royal Navy maintained Royal Navy Dockyards around the world. Dockyards of the Royal Navy are harbours ships are overhauled and refitted. Only four are operating today; at Devonport, Faslane, Rosyth and at Portsmouth. A Naval Base Review was undertaken in 2006 and early 2007, the outcome being announced by Secretary of State, Des Browne the Defence secretary confirming that all would remain however some reductions in manpower were anticipated.

Significant numbers of naval personnel are employed within the Ministry of Defence, Defence Logistics Organisation, Defence Procurement Agency and on exchange with the Army and Royal Air Force. Small numbers are also on exchange within other government departments.