Rostov-on-Don, January 17, RIA Novosti. The Russian Cossacks of the Don region believe secession of Kosovo from Serbia is unacceptable and will assist in the event that Pristina proclaims independence, declared Vladímir Voroninon, deputy atamán of the Grand Army of the Don Cossacks, on Thursday. 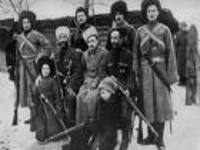 "Kosovo is the heart of Serbia, their native land. The country should preserve its territorial integrity," he said. “If Kosovo gets independence, the Cossacks will provide the necessary assistance to the Republic of Serbia and the Kosovo Serbs,” he said.

The secession of Kosovo would set a dangerous precedent that can lead the struggle for independence in Transnistria, South Ossetia and Abkhazia. "In the event that the independence of Kosovo is recognized, the Atamanes Council will meet to develop future (Cossack) Army policy with respect to Serbia," said Voronin.

"The Grand Army of the Don Cossacks cannot plan to take action of a military nature, but some unfettered Cossacks will very likely help their brethren in Serbia if hostilities begin," he said.