FARC to handover hostages to international group led by Venezuela

Three citizens held by the South American country’s largest guerrilla group will be released somewhere in the Andean jungles, in an operation commanded by Hugo Chavez. 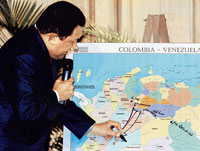 FARC to handover hostages to international group led by Venezuela

Colombia’s largest guerrilla group, the Revolutionary Armed Forces of Colombia (or FARC) are expected to release three hostages on Friday in a humanitarian exchange brokered by the Venezuelan president Hugo Chavez. Bogota finally backed Chavez’s plan after blaming Caracas of meddling in its internal affairs, in a risky move that has been also supported by Argentina, Brazil, Bolivia, Cuba, Ecuador and France.

Venezuelan planes and helicopters painted with red crosses will take off from five different airports in the Colombian border to later land in the Colombian town of Villavicencio. Then, the international group responsible for monitoring the operation will travel to an unknown place in the Andean jungle where the handover will take place. The Venezuelan military will be in charge of the logistics. The freed hostages will be taken to Villavicencio and then head to Venezuela before heading back to Colombia.

The operation was secretly discussed by Chavez himself with the presidents of Argentina, Cristina Fernandez, and France, Nicolas Sarkozy during Christmas. Colombia only accepted Chavez proposal when it became known that it had a broad international support.

Chavez explained the details of the operation on Wednesday, in a news conference at the Palace of Government in Caracas. Argentina appointed former president Nestor Kirchner to take part in the operation, as Brazil sent Marco Aurelio Garcia, President Lula Da Silva’s closest collaborator in foreign issues.

As relatives of the three rejoiced, Chavez described his plan to pluck former lawmaker Consuelo Gonzalez de Perdomo, 57; Clara Rojas, 44; and Emmanuel, 3, the son Rojas bore to a rebel in captivity, from a secret location deep in the jungle. The women have been held since 2001 and 2002, respectively. Rojas was the presidential campaign manager of French-Colombian politician Ingrid Betancourt when the two were abducted by FARC in February 2002. Betancourt remains in captivity.

An Argentine source that will participate in the mission did not rule out that Betancourt could be subject of further negotiations. “We will bring Ingrid back home very soon”, the source told Pravda.Ru. All over the week rumors about an imminent release of Betancourt flooded Latin American capitals rising expectations in Paris, where Sarkozy has personally involved in the case.

Rojas and Betancourt are among 45 hostages, including three Americans, whom the rebels want to exchange for some 500 FARC members held by the Colombian government. But the two sides have not agreed on conditions for the swap.

Colombian President Alvaro Uribe had named Chavez as a mediator for the possible swap but stripped him of the role after the Venezuelan leader ignored his demand that he not directly contact his generals. However, Chavez maintained his efforts as demanded by the relatives of the hostages. FARC leaders admire the Venezuelan President and have ties with the government in Caracas.

Bogota, which has testy relations with Caracas and had been largely sidelined in the hostage handover drama, quickly approved the plan. "The government of Colombia authorizes the humanitarian mission in the terms of its missive," Foreign Minister Fernando Araujo said in Bogota. "For constitutional reasons, the aircraft employed in this humanitarian mission should carry the emblems of the International Red Cross," he added.

"Soon we will have the final result, having her home again," Ivan Rojas, Clara Rojas's brother, told AFP. "I think that tomorrow, we will travel to Villavicencio. Definitely God is with us."

"We are very, very happy, we already feel that my mother, Clara and Emmanuel are very, very close, thanks to God," said Maria Fernanda Perdomo, a daughter of the abducted lawmaker.

It was not informed whether the FARC will handover the hostages for humanitarian reasons or in exchange of something.